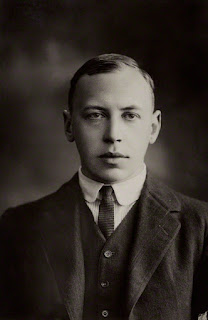 Alfred Noyes was one of my favourite poets when I was a child.  Although I included him in my first list of 'forgotten' Poets of the First World War, it was not until Debbie Cameron posted about his second marriage on her Facebook Page that I remembered I had not yet researched Alfred, nor included  him in the revised list!

Alfred Noyes was born in Wolverhampton, UK on 16th September 1880. His parents were Alfred Noyes, a Master Grocer, and his wife Amelia Adams Noyes, nee Rawley. Alfred Jnr. had the following siblings: Henry, b.1883, Maud A. b.1885, and Walter B., b. 1889.  The family moved to Wales in 1884.   After studying at Exeter College, Oxford, Alfred began to have his poetry collections published. "The Highwayman", perhaps his most famous poem, was first published in the August 1906 issue of “Blackwood's Magazine".

Alfred married Garnett Daniels in 1907. She was the youngest daughter of  Byron G. Daniels, a Colonel in the United States Army and a Civil War veteran, who was for some years U.S. Consul in Hull. Alfred then had a successful six-week lecture tour of the United States of America. A second visit to America in October of that year lasted six months. During that trip, he visited the principal American universities, including Princeton, where the impression he made was so favourable that in February 1914 he was asked to join the staff as a visiting professor, lecturing on modern English literature from February to June. He accepted, and for nine years he and his wife divided their time between England and America. At Princeton, Alfred taught F. Scott Fitzgerald, Edmund Wilson and John Peale Bishop. He resigned his professorship in 1923, but continued to travel and lecture throughout the United States of America for the rest of his life.

During the First World War, Alfred was not able to serve in the armed forces due to defective eyesight.  From 1916, he did his military service on attachment to the Foreign Office, where he worked with other literary figures of the day with John Buchan for the British Propaganda Bureau. Alfred also did his patriotic duty writing morale-boosting short stories and poems. Perhaps his best-known anti-war poem was "The Victory Ball" (also known as "A Victory Dance"), which was first published in “The Saturday Evening Post” in 1920.

In 1924, Alfred wrote some poems for the Pageant of Empire at the British Empire Exhibition, which were set to music by Sir Edward Elgar and known as “Pageant of Empire”. Among these poems was one entitled “Shakespeare's Kingdom”. Garnett died in 1926 at Saint-Jean-de-Luz, France, where she and Alfred were staying with friends.

After the death of his first wife, Alfred married Mary Angela née Mayne (1889–1976). She was the widow of Lieutenant Richard Shireburn Weld-Blundell, who was killed in the First World War. The couple went to live on the Isle of Wight and had three children: Hugh (1929–2000), Veronica and Margaret. Their younger daughter married Michael Nolan (later Lord Nolan) in 1953.

Alfred had numerous WW1 poetry collections published:  “Rada: A Belgian Christmas Eve” (Methuen, London, 1915); “Songs of the Trawlers” (Shorter, London, 1916):  “Songs of Shadow-of-a-leaf, and Other Poems” (Blackwood, 1924) and his poems were included in 23 WW1 poetry anthologies.

“A Prayer In Time Of War” - Poem by Alfred Noyes

The war will change many things in art and life, and among them, it is to be hoped, many of our own ideas as to what is, and what is not, "intellectual."

Thou, whose deep ways are in the sea,
Whose footsteps are not known,
To-night a world that turned from Thee
Is waiting -- at Thy Throne.

The towering Babels that we raised
Where scoffing sophists brawl,
The little Antichrists we praised --
The night is on them all.

How should we seek to Thee for power
Who scorned Thee yesterday?
How should we kneel, in this dread hour?
Lord, teach us how to pray!

Grant us the single heart, once more,
That mocks no sacred thing,
The Sword of Truth our fathers wore
When Thou wast Lord and King.

Let darkness unto darkness tell
Our deep unspoken prayer,
For, while our souls in darkness dwell,
We know that Thou art there.