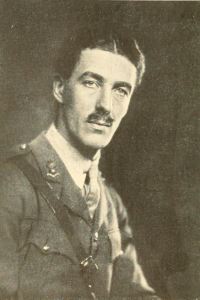 William Coningsby Dawson was born in High Wycombe, England, on 26th February 1883.  After graduating from Oxford University, he went to America to study theology at Union College in Schenectady, NY.

Commissioned into the Royal Canadian Field Artillery, Coningsby was posted to France in September 1916, during the height of the Somme Offensive.   January 1917 brought some well-earned leave with his family in London, after which Coningsby returned to the front lines.  He was badly wounded during the fight for Lens in June 1917 and almost lost an arm. He returned to Britain for treatment and that was followed by some home leave convalescing  in America and Canada, during which time he wrote about his war-time experiences and had his work published.  Coningsby returned to his Regiment in France at the end of October 1917.

After the war, Coningsby returned to Britain on behalf of the American Government, in order to report back on the problems involved in rebuilding war-torn Europe,  reporting and lecturing on what he saw.

“The Glory of the Trenches” by Coningsby Dawson with an introduction by his father, W.J. Dawson, was published in 1918 by John Lane, New York.

“To You at Home” by Coningsbuy Dawson

Each night we panted till the runners came,
Bearing your letters through the battle-smoke.
Their path lay up Death Valley spouting flame,
Across the ridge where the Hun's anger spoke
In bursting shells and cataracts of pain;
Then down the road where no one goes by day,
And so into the tortured, pockmarked plain
Where dead men clasp their wounds and point the way.
Here gas lurks treacherously and the wire
Of old defences tangles up the feet;
Faces and hands strain upward through the mire,
Speaking the anguish of the Hun's retreat.
Sometimes no letters came; the evening hate
Dragged on till dawn. The ridge in flying spray
Of hissing shrapnel told the runners' fate
We knew we should not hear from you that day —
From you, who from the trenches of the mind
Hurl back despair, smiling with sobbing breath,
Writing your souls on paper to be kind,
That you for us may take the sting from Death.

The book can be downloaded free from Project Gutenberg: