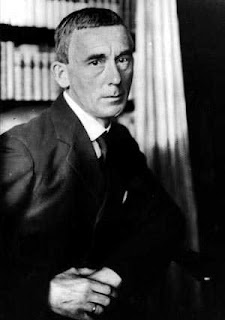 Hugo Ball was born in Pirmasens, Germany on 22nd February 1886. He went to University in Munich and Heidelberg, where he studied sociology and philosophy.  Aspiring to be an actor, Hugo moved to Berlin in 1910, where he worked with Max Reinhardt, the theatre and film director.

When war broke out in 1914, Hugo volunteered to join the German Army but was turned down due to health issues. At the time, Hugo said:  "The war is founded on a glaring mistake, men have been confused with machines." Branded a traitor, he fled to Switzerland with the cabaret performer and poet Emmy Hennings.  They were married in 1920

In 1916, Hugo Ball created the Dada Manifesto.  He also wrote the poem "Karawane," around that time.

Hugo was one of the founders of the Cabaret Voltaire in Zürich and was the leader of the Dada movement in Zürich.  Emmy Hennings, was also a member of Dada. Dada, or Dadaism, was an art movement in Europe during the early 20th century, with centers in Zürich, Switzerland, at the Cabaret Voltaire; New York Dada began in about 1915, and after 1920 Dada flourished in Paris.

His poem "Gadji beri bimba" was adapted for the song "I Zimbra" on the 1979 Talking Heads album “Fear of Music” and Hugo was credited as the lyric writer for the song on the track listing. 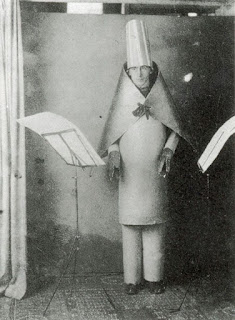 "Rally round the Flag"

Let us rally around the flag!
Arise! Arise!
Beat the drums and hear the beat of hoofs
Leave the songs and the temples of night.
Everything is blazing and bright.

Leave your aches and pains!
Shake those golden manes.
Be like a wounded hyena,
From deep within your chests howl
A bronze uprising.
Glow throughout all the country.
Shed your blood and pray.

Dada or Dadaism was an art movement of the European avant-garde in the early 20th century, with early centers in Zürich, Switzerland, at the Cabaret Voltaire; New York Dada began circa 1915, and after 1920 Dada flourished in Paris.