Jesse Dancey was born on a farm in Fairbury, Illinois, USA in 1876. His father was a farmer who had emigrated to America in 1847 from County Cavan in Ireland.

After college, Jesse studied Theology and in 1898 he was ordained as a Deacon by Bishop William Nende. He graduated from Illinois Wesleyan College in 1899 and Boston School of Theology in 1902.   He studied at the University of Chicago for his Master’s Degree.

During the First World War, Jesse served as a Red Cross Chaplin with the Northwestern University Medical Unit in England and France.

From 1889 until his death in 1936, Jesse was a Wesleyan Minister in Ohio, Illinois, Missouri and Iowa.

Jesse's poem "Etaples Military Cemetery" was written in France on 30th May 1918 - America's Memorial Day is held annually on the last Monday in the month of May. 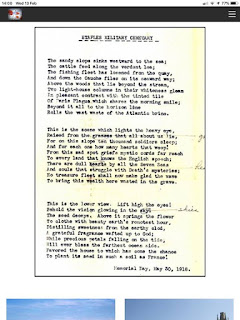