Remembering the Members of the South African Labour Corps who lost their lives in the sinking of the S.S. "Mendi" on 21st February 1917 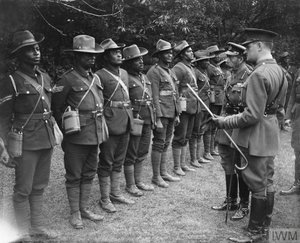 The Steam Ship 'Mendi' was on her way to France from South Africa carrying members of the South African Labour Corps. The "Mendi" collided in thick fog at 5 a.m. on the morning of 21st February 1917 with the Royal Mail Packet Company's cargo ship  SS “Darro'.  The 'Mendi', which was the smaller of the two ships, rapidly sank with the loss of the lives of 616 South Africans and 30 members of the ship’s crew.

The South African Native Labour Corps (SANLC) was a force of workers formed in 1916 in response to a British request for workers at French ports. About 25,000 South Africans joined the Corps.  Although members of the Corps did not fight, their contribution to the war effort was extremely important.  The photograph shows King George V inspecting members of the SANLC in France. 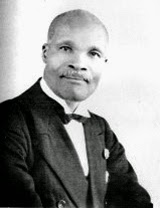 Yes, this thing flows as a normal thing from that.
The thing we know is not scared of that;
We say, things have happened as they should have,
Within our brains we say: it should have been so;
If it hadn’t been so, nothing would have come right.
You see Sotase, things came right when the Mendi sank!
Our blood on that ship turned things around,
It served to make us known through the world!

See the rest of the poem here: https://www.poetryinternationalweb.net/pi/site/poem/item/13291/auto/SINKING-OF-THE-MENDI 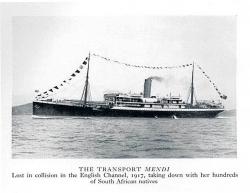