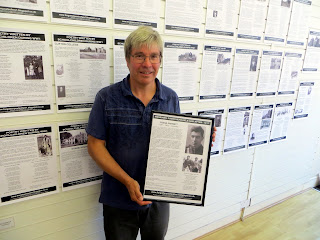 Frank was born on 24th February 1893 on his grandfather’s farm in Ontario, Canada, where he grew up.

Studying at the University of Toronto when war broke out, Frank enlisted in the Canadian Army as a Private and was posted to the Western Front.  He was commissioned as an officer into the British Army, joining the Royal Horse Artillery.  He served on the Western Front during the Battle of Passchendaele and was severely shell-shocked when a shell burst near him.

Frank was sent back to Britain for treatment at Lennell House in Berwickshire, where he met Siegfried Sassoon.  After repatriation to Canada, Frank returned to Britain and made his home there.

With Siegfried’s help, Frank had some of his poetry published – “The Rural Scene” was published in 1924.

Frank Prewett was included in the exhibition of Poets of Arras, Messines, Passchendaele & MOre, 1917" which was held at The Wilfred Owen Story in Birkenhead, Wirral, UK in 2017.  The photograph is of David Youngs, a relative of Frank Prewett, holding a copy of Frank's exhibition panel.

Hearing the whine and crash
We hastened out
And found a few poor men
Lying about.

I put my hand in the breast
Of the first met.
His heart thumped, stopped, and I drew
My hand out wet.

Another, he seemed a boy,
Rolled in the mud
Screaming, "my legs, my legs,"
And he poured out his blood.

We bandaged the rest
And went in,
And started again at our cards
Where we had been.