I only began researching the male poets of WW1 from
1916 onwards.  I am now trying to add those involved
in the conflict in 1914 and 1915 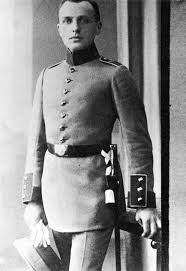 Alfred was born on 23rd August 1889 in Berlin-Wilmersdorf in Germany. His father was a wealthy manufacturer.   Alfred studied law and attended the universities of Berlin and Erlangen-Nuremberg.

Alfred joined the German Army in 1914 and was killed on 25th September 1914 near Vermandovillers on the Somme.

The earth smells musty with fog.
The evening feels like lead.
Electrical crashes ring and rip the air
And whining breaks everything in two.

The villages on the horizon
Send up smoke like dirty rags
God-forsaken, I lie
In the roar of the Front Line.

Many hostile copper birds
Whir around my heart and brain.
I steep myself deeply in the gray
And set myself to face death.

Sarrebourg (French pronunciation: ​[saʁbuʁ]; German: Saarburg; Lorraine Franconian: Saarbuerj) is a commune in the Moselle department in Grand Est in north-eastern France. It lies in on the upper course of the river Saar.

The Battle of Lorraine (14 August – 7 September 1914) was a battle on the Western Front during the First World War. The armies of France and Germany had completed their mobilisation, the French with Plan XVII, to conduct an offensive through Lorraine and Alsace into Germany and the Germans with Aufmarsch II West, for an offensive in the north through Luxembourg and Belgium into France, supplemented with attacks in the south to prevent the French from transferring troops to the greater threat in the north.