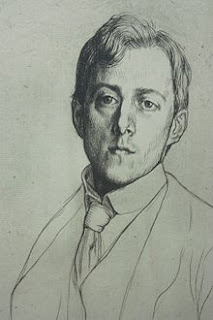 Robert Laurence Binyon was born on 10th August 1869 in Lancaster, Lancashire, UK.  His parents were Frederick Binyon, an Anglican Church Minister and Vicar Of Winchcomb With Gretton, and his wife, Mary Binyon, nee Dockray.   Laurence's siblings were Francis and Charles.

Educated at St. Paul's School and Trinity College, Cambridge, Laurence began work at the British Museum in the Department of Printed Books in 1893.   He later became Assistant- Keeper British Museum Department Of Prints And Drawings.

In 1904, Laurence married historian Cicely Margaret Powell, and the couple had three daughters.


Although Laurence's  name was put forward for the post of British Poet Laureat on the death of Alfred Austin, the poet Robert Bridges was chosen.

In 1915, too old to enlist in the armed forces, Laurence volunteered at a British hospital for French soldiers, Hôpital Temporaire d'Arc-en-Barrois, Haute-Marne, France, working briefly as a hospital orderly. He returned in the summer of 1916 and took care of soldiers from the Verdun battlefield. He wrote about his experiences in “For Dauntless France” (1918) and his poems, "Fetching the Wounded" and "The Distant Guns", were inspired by his hospital service in Arc-en-Barrois.

“For Dauntless France - An Account of Britain's Aid to the French Wounded and Victims of War” compiled by Laurence Binyon  (Hodder and Stoughton, London,1918)

The phrase repeated at memorial services “We will remember them” comes from Laurence Binyon’s most famous poem "For the Fallen", which was first published in “The Times” newspaper in September 1914.

At the road's end glimmer the station lights;
How small beneath the immense hollow of Night's
Lonely and living silence! Air that raced
And tingled on the eyelids as we faced
The long road stretched between the poplars flying
To the dark behind us, shuddering and sighing
With phantom foliage, lapses into hush.
Magical supersession! The loud rush
Swims into quiet: midnight reassumes
Its solitude; there's nothing but great glooms,
Blurred stars; whispering gusts; the hum of wires.
And swerving leftwards upon noiseless tires
We glide over the grass that smells of dew.
A wave of wonder bathes my body through!
For there in the headlamps' gloom--surrounded beam
Tall flowers spring before us, like a dream,
Each luminous little green leaf intimate
And motionless, distinct and delicate
With powdery white bloom fresh upon the stem,
As if that clear beam had created them
Out of the darkness. Never so intense
I felt the pang of beauty's innocence,
Earthly and yet unearthly. A sudden call!
We leap to ground, and I forget it all.
Each hurries on his errand; lanterns swing;
Dark shapes cross and re--cross the rails; we bring
Stretchers, and pile and number them; and heap
The blankets ready. Then we wait and keep
A listening ear. Nothing comes yet; all's still.
Only soft gusts upon the wires blow shrill
Fitfully, with a gentle spot of rain.
Then, ere one knows it, the long gradual train
Creeps quietly in and slowly stops. No sound
But a few voices' interchange. Around
Is the immense night--stillness, the expanse
Of faint stars over all the wounds of France.

Now stale odour of blood mingles with keen
Pure smell of grass and dew. Now lantern--sheen
Falls on brown faces opening patient eyes
And lips of gentle answers, where each lies
Supine upon his stretcher, black of beard
Or with young cheeks; on caps and tunics smeared
And stained, white bandages round foot or head
Or arm, discoloured here and there with red.
Sons of all corners of wide France; from Lille,
Douay, the land beneath the invader's heel,
Champagne, Touraine, the fisher--villages
Of Brittany, the valleyed Pyrenees,
Blue coasts of the South, old Paris streets. Argonne
Of ever smouldering battle, that anon
Leaps furious, brothered them in arms. They fell
In the trenched forest scarred with reeking shell.
Now strange the sound comes round them in the night
Of English voices. By the wavering light
Quickly we have borne them, one by one, to the air,
And sweating in the dark lift up with care,
Tense--sinewed, each to his place. The cars at last
Complete their burden: slowly, and then fast
We glide away. And the dim round of sky,
Infinite and silent, broods unseeingly
Over the shadowy uplands rolling black
Into far woods, and the long road we track
Bordered with apparitions, as we pass,
Of trembling poplars and lamp--whitened grass,
A brief procession flitting like a thought
Through a brain drowsing into slumber; nought
But we awake in the solitude immense!
But hurting the vague dumbness of my sense
Are fancies wandering the night: there steals
Into my heart, like something that one feels
In darkness, the still presence of far homes
Lost in deep country, and in little rooms
The vacant bed. I touch the world of pain
That is so silent. Then I see again
Only those infinitely patient faces
In the lantern beam, beneath the night's vast spaces,
Amid the shadows and the scented dew;
And those illumined flowers, springing anew
In freshness like a smile of secrecy
From the gloom--buried earth, return to me.
The village sleeps; blank walls, and windows barred.
But lights are moving in the hushed courtyard
As we glide up to the open door. The Chief
Gives every man his order, prompt and brief.
We carry up our wounded, one by one.
The first cock crows: the morrow is begun.