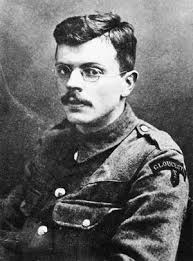 Ivor Gurney was born in Gloucester on 23rd August 1890. His parents were David Gurney a taylor, and his wife, Florence, a seamstress. Ivor won a scholarship to study at the Royal College of Music in 1911.

During the First World War, Ivor joined the Gloucestershire Regiment as a Private in February 1915.   He served on The Somme in 1916 during which time he suffered from Shell Shock. Ivor was wounded in April 1917. He returned to the Western Front and was gassed and sent to hospital in Edinburgh, where he fell in love with a VAD nurse called Annie Nelson Drummond but the relationship did not last.

In March 1918 Ivor suffered a breakdown and was again hospitalised. His family had him declared insane and he spent the last fifteen years of his life in psychiatric hospitals. Ivor died of Tuberculosis on 26th December 1932. 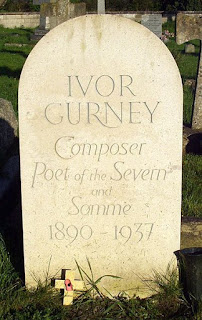 Ivor set a number of his poems to music - the best known is entitled “Severn Meadows”.

"To the Poet before Battle" by Ivor Gurney

Now, youth, the hour of thy dread passion comes;
Thy lovely things must all be laid away;
And thou, as others, must face the riven day
Unstirred by rattle of the rolling drums
Or bugles' strident cry. When mere noise numbs
The sense of being, the sick soul doth sway,
Remember thy great craft's honour, that they may say
Nothing in shame of poets. Then the crumbs
Of praise the little versemen joyed to take
Shall be forgotten; then they must know we are,
For all our skill in words, equal in might
And strong of mettle as those we honoured. Make
The name of poet terrible in just war,
And like a crown of honour upon the fight.