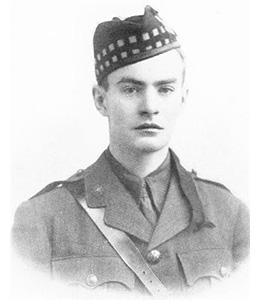 Born in Hampstead, London, UK in 1893, John’s parents were Thomas Fredrick Collinson, a Barrister, and his wife Mary Innes Collinson, nee Grieg, whose father was John Borthwick Greig, of Hampstead, who was a Writer to the Signet*.

John’s father was a member of the London County Council. John had a brother, Fredrick Grieg Collinson, who studied medicine and became a General Practitioner, and a sister, Mary Grizel Collinson.  The family lived in Hampstead in London.   John was educated at Westminster School, where he joined the Officers’ Training Corps and became a Sergeant. In 1912, he went up to Christ Church College, Oxford to study history. He was a crack shot and also a boxer and cricketer.

Commissioned into the Royal Scots Regiment in September 1914 as a Second Lieutenant, John was posted to France in May 1915. He was promoted to the rank of Lieutenant, transferred to 116th Machine Gun Company and sent for training at the Machine Gunnery School in Grantham, UK.

Returning to the Western Front, John was killed during the 3rd Battle of Ypres on 31st July 1917 (also known as the Battle of Passchendaele).  A wooden cross with the inscription: “In loving memory of Lt J C Hobson, 116th Machine Gun Company. Killed July 31st 1917” was placed over the place where, as far as is known, his body was hastily buried. In 1920, the cross was removed and re-erected in the “Memorial Plot” in the New Irish Farm cemetery, near St Jean.  John Collinson Hobson is commemorated on the Menin Gate Memorial, Panel 56, Ypres, Belgium.

John’s WW1 poetry collection “Poems, etc.” with a biographical note and a memoir by John Murray, was published by Blackwell, Oxford, in 1920.


From “The Machine Gun” by John Collinson Hobson

Here do I lie,
Crouched in the grass
With my machine-gun
Loaded, lurking, ready,
Fast must he fly
Who fain would pass.
Sure is my eye
My hand is steady.
The sky is blue,
The planes are humming,
But my machine gun
Waits and watches ever.
Fair is the view,
Though guns be drumming,
Though yonder hill from this
King Death doth sever.
All around me
Blows the dogrose;
But my machine gun
Hidden is in daisies,
Lurking is he
Where the grass grows,
Peering ever forth
Through summer hazes


*The Society of Writers to Her Majesty’s Signet is a private society of Scottish solicitors, dating back to 1594 and part of the College of Justice.