With grateful thanks to Andrew Mackay for his kind help which allowed me to discover another ‘Forgotten’ soldier poet of the First World War. 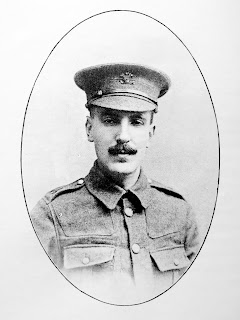 Edward became a clerk and then a civil servant. During the First World War he joined the London Regiment - 15th (County of London) Battalion (P.W.O. Civil Servants) – as a Private, No. 2363.  Posted to the Western Front, Edward was killed on 1st January 1916 in the Hohenzollern Redoubt, near Auchy-les-Mines in France.  He was buried in Quarry Cemetery, Vermelles, France – Grave Reference C. 14.

Edward Loxdale is also remembered on a memorial in the United Reformed Church, Junction of Chapel Road & Hanworth Road in Hounslow, Middlesex.

“The Day before Short Leave” by Edward Loxdale

The great guns are firing before and around,
And the sinister rifles are talking;
But changed is their yell for a spell to the sound
Of the feet that the pavements are walking.
Far, far  from the trenches my pleasant thoughts roa,
Forgotten this region of ditches;
I am back once again in the town that’s my howm,
‘Mid her splendours, and glories and riches.

Sources:
Find my Past
https://www.cwgc.org/find/find-war-dead
“A Souvenir of a Soldier: Impressions of Active Service in France and Belgium during the Great War” Private Edward Loxdale (IMCC Ltd. First printed in 1916 by Hazell, Watson & Viney Ltd, London and published by Edward's Office Companions)
and
https://books.google.co.uk/books?id=irIYDgTDjDgC&pg=PA66&lpg=PA66&dq=Edward+Loxdale&source=bl&ots=s5Mtgtt8YY&sig=ACfU3U0jHfI5aP4heFTy8knBHU2r0W2m2g&hl=en&sa=X&ved=2ahUKEwjpucbWiJfkAhUjPewKHYDqD084ChDoATADegQIDBAB#v=onepage&q=Edward%20Loxdale&f=false

“Civil Service Rifles in the Great War: 'All Bloody Gentlemen' “ by Jill Knight

Photograph of Edward from "A Souvenir of a Soldier".

THANK YOU SO MUCH, ANDREW.