“Talked to two Irish officers in the train. One knew Ledwidge the poet,
and he ‘could imitate birds and call them to him’ “  Siegfried Sassoon 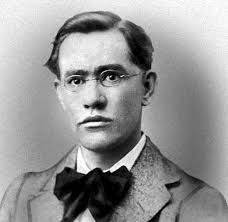 Francis was born on 19th August 1887 in Slane in County Meath in Ireland. He was the eighth of nine children born to Patrick Ledwidge and his wife Ann, nee Lynch. The death of his father when he was five years old, meant that Francis had to leave school at the age of thirteen and go out to work.

Francis began writing poetry at a young age and had poems published in local papers when he was fourteen.  The writer Edward Plunkett, 18th Baron of Dunsany – Lord Dunsany - became Francis’s patron after Francis sent him examples of his work. Lord Dunsany introduced Francis to W.B. Yeats. He also allowed Francis to write in the library of Dunsany Castle and there he met the poet Katharine Tynan with whom he corresponded.

In 1904, when Francis was seventeen, he joined the 5th Battalion of the Royal Dublin Fusiliers. At that time he was living in Rathfarnham, Co. Dublin and was a grocer’s assistant.

During the First World War, Francis enlisted in Lord Dunsany’s Regiment 5th Battalion Royal Inniskilling Fusiliers. He saw action at Sulva Bay in the Dardanelles during the Gallipoli Campaign
and was injured during a mountain journey in Serbia in December 1915.

Posted to the Western Front in January 1917, Francis continued to write poetry. On 31st July 1917, he was in a working party road-laying prior to the Third Battle of Ypres, when he was killed
by a shell. At the time of his death, Francis held the rank of Lance Corporal. After initial burial at Carrefour de Rose, Francis was re-buried in Artillery Wood Military Cemetery, Boezinge, Belgium.
There is a memorial to his memory marking the spot where he was killed.

I heard the Poor Old Woman say:
“At break of day the fowler came,
And took my blackbirds from their songs
Who loved me well thro’ shame and blame.

No more from lovely distances
Their songs shall bless me mile by mile,
Nor to white Ashbourne call me down
To wear my crown another while.

With bended flowers the angels mark
For the skylark the places they lie,
From there its little family
Shall dip their wings first in the sky.

And when the first surprise of flight
Sweet songs excite, from the far dawn
Shall there come blackbirds loud with love,
Sweet echoes of the singers gone.

But in the lonely hush of eve
Weeping I grieve the silent bills.”
I heard the Poor Old Woman say
In Derry of the little hills.

From "An Anthology of Irish Verse" edited by Padraic Collum and published in 1922 by Boni and Liveright, New York