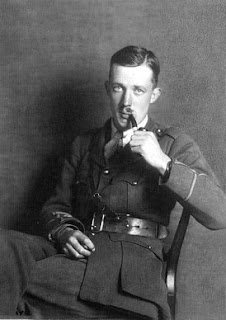 Crosbie Alfred Norman Garstin was born in Mount Vernon, Newlyn, Cornwall. His parents were Norman Garstin, a Newlyn School artist, and Louisa Garstin, known as ‘Dochie’, née Jones. He was the eldest of three children, his siblings being Denys (later Denis, who also became a poet) (1890 – 1918) and Alethea (1894 – 1978).

Educated at Brandon House, Cheltenham, Elstow School, Bedford and in Germany, Crosbie excelled at Rugby Union Football and Swimming.   As a young man he travelled extensively, working as a ranch hand in Montana in America and as a lumberjack in Canada.   He also travelled to China, Hawaii, Japan and Morocco. When he returned home his father despatched him to South Africa, where he ran a cattle ranch in Bechuanaland and was a bush ranger to the Tati Concessions.

When war broke out in 1914, Crosbie returned to Britain and in October 1914 joined B Squadron of the King Edward's Light Horse Regiment as a Private. This was a cavalry regiment for colonials. The Regiment was ordered to France on 21st April 1915, when Garstin was promoted to the rank of Lance Corporal.   Commissioned on the battlefield as a Second Lieutenant on 14th September 1915, Crosbie then joined C Squadron, which was attached to the 47th (London) Division at Nœux-les-Mines and was involved in the Battle of Loos.

In 1916, Crosbie was posted to Dublin as an Intelligence Officer. He later served in Italy on the Italian Front and served with the King Edward's Horse Regiment until 1920.

Crosbie married Lilian Barkworth in 1924  at All Saints Chruch, Ennismore Gardens, Knightsbridge.  He disappeared in rather strange circumstances.  He was rowing back to shore from a party held aboard a friend's yacht  - “The Osprey” - in the Salcombe Estuary on 19th April 1930. The rowing boat in which he was returning capsized and his body was never found, despite Crosbie being a strong swimmer.  His widow, Lillian, was Mayor of Penzance from 1962 – 1963.

Crosbie wrote “The Penhale Trilogy”, a novel based in 18th-century Cornwall. He also wrote poems and contributed to “Punch” magazine.   His WW1 poetry collections were:  “The Ballad of the Royal Ann and Other Poems” (Heinemann, London, 1922) and “Vagabond Verses” (Sidgwick & Jackson, London, 1917).  Crosbie also had poems included in four WW1 anthologies. 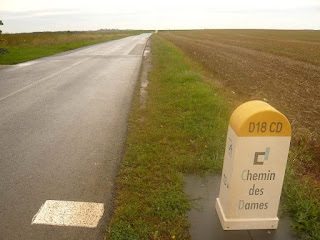 In silks and satins the ladies went

Where the breezes sighed and the poplars bent,

Taking the air of a Sunday morn

Midst the red of poppies and gold of corn-

With negr pages and serving maids,

In scarlet coach, or in gilt sedan,

With brooch and buckle and flounce and fan,

Patch and powder and trailing scent,

Under the trees the ladies went -

Lovely ladies that gleamed and glowed,

As they took the air on the Ladies’ Road.

Boom of thunder and lightning flash -

The torn earth rocks to the barrage crash;

From the mad machine-guns chattering;

Trenches plastered with flesh and blood –

The blue ranks’lock with the ranks of grey,

Stab and stagger and sob and sway;

The living cringe from shrapnel bursts,

The dying moan of their burning thirsts,

Moan and die in the gulping slough –

Where are the butterfly ladies now ?

The Chemin des Dames in France is part of the D18 and runs east and west in the département of Aisne between the Route Nationale 2, (Laon to Soissons) and the D1044 at Corbeny. It is some thirty kilometres long and runs along a ridge between the valleys of the rivers Aisne and Ailette. It acquired the name in the 18t Century as it was the route taken by the two daughters of Louis XV, Adélaïde and Victoire, who were known as Ladies of France. At the time, it was scarcely a carriage road, but it was the most direct route between Paris and the Château de Boves, near Vauclair, on the far side of the Ailette. The château belonged to Françoise de Châlus, former mistress of Louis XV, Countess of Narbonne-Lara and former lady in waiting to Adélaïde, whom the two ladies visited frequently. To make the way easier, the Count had the road surfaced, and it gained its new name. The ridge's strategic importance first became evident in 1814 when Napoleon's young recruits beat an army of Prussians and Russians at the Battle of Craonne.

During the First World War, three battles were fought along the Chemin des Dames east-to-west ridge located to the north of Paris. All are named after the river flowing on the south side of the ridge. Their names are as follows:

Second Battle of the Aisne (1917) - main component of the Nivelle Offensive.

Sources:   Find my Past, Free BMD and 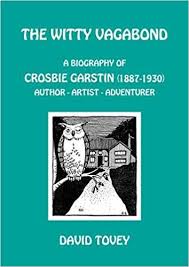 “The Witty Vagabond – A Biography of Crosbie Garstin (1887-1930)” is a book by David Tovey, who is best known for his outstanding series of books on the artists who worked in St Ives in the latter part of the nineteenth century and the first half of the twentieth. In the course of his researches into the artists, both as painters and in their social life, he became intrigued by the character of Crosbie Garstin and this biography is the result.

Crosbie Garstin featured in an exhibition entitled "Aftermath of the First World War" held at the Wilfred Owen Story Museum, Wirral, UK in 2019.