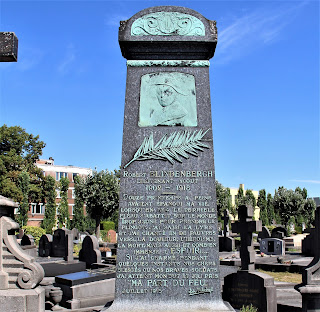 Robert Blindenbergh was a young poet. Nobody seems to have any more of the verses he wrote for Belgian soldiers who were admitted to hospitals in Pas-de-Calais during WW1. At the outbreak of war he was 12 years old and served as a scout for some service in the army before joining his parents at the Base-Rear de Calais.

The young poet died prematurely in 1918 at the age of 16. He was buried in the cemetery of Ixelles, his grave being adjacent to the square of the Belgian soldiers.  "If I cast a spell on our brave soldiers for a few moments, I achieved my goal and took my share of the fire," wrote Robert – described as a scout, lieutenant, poet.

Unfortunately, this phrase from the poet written on his grave is the only one found so far. However, there is evidence of Robert's talent in the archives of Calais in an article published on December 1, 1915 in the newspaper"La France du Nord". Here's an extract from that article mentioning Blindenbergh's accomplishments. General Cloothen, commander of the Belgian base in Calais said: “Let's not forget 13-year-old Boy Scout Robert Blindenbergh, who, a precocious emulator of Galipaux, performed his own works with inestimable gusto and confidence. The success has crossed all boundaries. ”