With thanks to Historian Andrew Mackay for finding Sydney for us 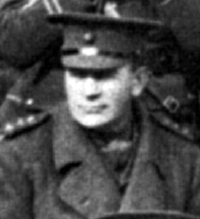 During the First World War, Sydney was posted to France in February 1915, by which time he held the rank of Captian.  However, he was repatriated in March 1915, as he had become ill with pneumonia.

In September 1915 Sydney was promoted to the rank of Major and in March 1916 he was attached to the Egyptian Army, a posting that lasted until 1917. He was then made a temporary Lieutenant-Colonel. In 1919 Sydney was awarded an OBE (Order of the British Empire).

Around no fire the soldiers sleep to-night,

But lie a-wearied on the ice-bound field,

With cloaks wrapt round their sleeping forms, to shield

Them from the northern winds. Ere comes the light

Of morn brave men must arm, stern foes to fight.

The sentry stands his limbs with cold congealed;

His head a-nod with sleep; he cannot yield,

Though sleep and snow in deadly force unite.

Amongst the sleepers, lies the Boy awake,

And wide-eyed plans glories that transcend

The deeds of heroes dead; then dreams o'ertake

To one grand theme, and through all barriers break

To guard from hurt his faithful sleeping friend.

Sydney had poems published in five WW1 Anthologies, including “Soldier Poets: Songs of the Fighting Men” (Eskine Macdonald, London, 1916) in which “The Battlefield” was included on page 72.