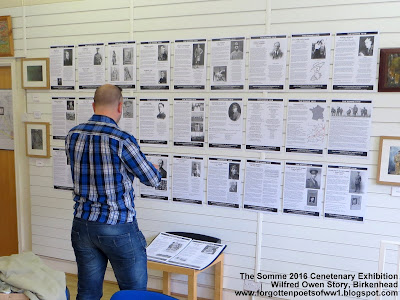 The poet Alexander Robertson was born on 12th January 1882.

Alexander featured in the exhibition of Poets, Writers and Artists of the Somme, 1916 which was on display at the Award-winning Wilfred Owen Story in Birkenhead, Wirral, UK in 2016. Panels from the exhibition are on file at the WOS, which is open from Tuesday - Friday from 12 noon until 2 pm. Entry is free.

Alexander was born in St. Cuthbert's, Edinburgh, the eldest son and second child of five born to Robert Robertson, a schoolteacher, and his wife Mary Jane Robertson.

After studying at Edinburgh University, Alexander taught history before going up to Oxford.  He took up a post at Sheffield University in February 1914.   When war broke out, Alexander joined the 12th (Service) (Sheffield) Battalion of the York and Lancaster Regiment as a Private.   At the time of his death on the Western Front on 1st July 1916, Alexander was an Acting Corporal.

His WW1 Poetry collections were:  "Comrades, poems" (Elkin Mathews, London, 1916) and "Last Poems" published after his death by Elkin Mathews in 1918.  Alexander's poems were included in six WW1 anthologies, including "The Muse in Arms".