With thanks to Connie Ruzich for reminding me I had not posted this information. 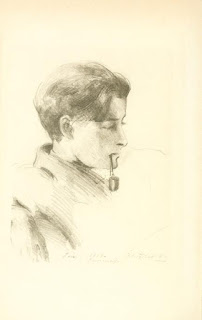 Born on 14th May 1890, Ivar’s parents were Lord George Granville Campbell and his wife, Sybil Lascelles Alexander. Ivar’s grandfather was the 8th Duke of Argyll. Ivar’s siblings were Joan and Enid.

When war broke out, Ivar volunteered to join the Army but was rejected due to defective eyesight. Instead, he joined an American Red Cross Society unit in France as an ambulance driver.  In February 1915, he was commissioned into the 1st Seaforth Highlanders Regiment and posted to the Western Front.  In May 1916, his Regiment deployed to Mesopotamia. Leading his men against the Turkish position at Sheikh Saad on 7th January 1916, Ivar was shot and died of his wounds the following day. He is remembered on Panel 41 on the Basra Memorial in Iraq.

After his death, Ivar’s friends and family published: “Letters of Ivar Campbell London” Privately Printed, 1917 and “The Prose Writings of Ivar Campbell”.  He had a poem published in Frederic W. Ziv’s anthology “The Valiant Muse: An Anthology of Poems by Poets killed in the World War” (Putnam, New York, 1936).

“A Meditation upon the Return of the Greeks”

Trojan War, 5th c. BC terracotta cup
When in their long lean ships the Greek host weighted
Their splashing anchors, then they had much joy
For lovely Helen’s sake to humble Troy…
Their first deed was the murder of a maid.†

Ten years from their pleasant land they stayed,
And after ten years, had they any joy?
They had old Helen, and they humbled Troy:
Were they at her lost loveliness dismayed?

Thinking of their lost Youth were they afraid?
Was Youth worth more than Helen—Helen of Troy?
Was it for this tired face they had spent joy?

"For What," Frederick H. Varley
Canadian War Museum
For this tall, weary woman burnt a maid?

When on that quiet night the Greek host laid
Down their dinted armour, had they any joy?

Ivar is rmembered in the little book "Poets' Corners in Foreign Fields".