Egbert’s Mother was Emily Sandford, nee Biddle, who was born in1842.

In 1893, Egbert married Annie Louisa Harris and they had had a son, Egbert Theodore, born in 1896, who served as a Second Lieutenant in the Devonshire Regiment during the First World War.

Here is one of Egbert's poems:

The travelers are astir—
Bearing frowns for incense,
Scorns for myrrh.

Dear Lord:
Who fain would find the Saviour
Find the Sword.

“Mr. Egbert J. Sandford describes himself as "… an ordinary working man," whose whole effort, so far as his art is concerned, is to " take the common things of life and weave them into song." How far he has succeeded in this effort may be gathered from the fact that a number of the poems here collected have appeared in the Spectator, the Poetry Review, the Westminster Gazette and Great Thoughts. The poem to his brother bard, the street salesman Mr. Wm. Shepperley, is re- printed from the Evening Standard. To the editors of these papers our thanks are due for their courtesy in permitting republication.

In his working hours Mr. Sandford is a storehouseman at Plymouth, and is at present employed in that capacity under the Government. The chief literary influences in his life have been William Blake and Francis Thompson, and a literary class at Blackheath has been his chief means of encouragement and
inspiration. To one of its talented lecturers— Mr. Albert A. Cock, B.A. — he owes the friendly notice of Mr. Strachey, editor of the Spectator. Several other critics have since given him a generous meed of praise.   S. Gertrude Ford” 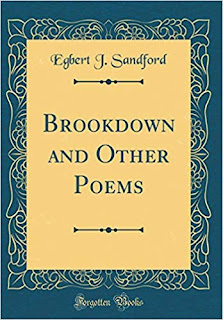 It is easy to see how people mistake the T for a J...

Poem from Connie Ruzich website Behind Their Lines: https://behindtheirlines.blogspot.com/…/12/bethlehem-1915.h…