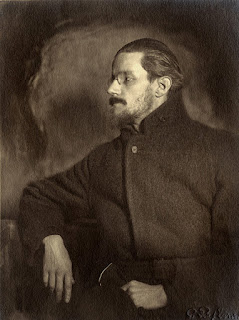 James Augustine Aloysius Joyce  was born in Dublin on 2nd February 1882.  He was educated at a school run by the Christian Brothers and then attended the Jesuit schools Clongowes and Belvedere. He then studied at University College Dublin.

James, who was a pacifist, spent the First World War in Switzerland, where he wrote this poem which was inspired by ‘Mr. Martin J. Dooley’, a satirical literary personage invented by the American journalist, Chicago-born Finley Peter Dunne (1867-1936).

Source:  Catherine W. Reilly "English Poetry of the First World War: A Bibliography" (St. Martin's Press, New York, 1978) p.183.  According to Reilly, James Joyce’s “Critical Writings” edited by Ellsworth Mason and Richard Ellman and published by Faber & Faber in 1959, included the poem “Dooleysprudence”, written in 1916 when James Joyce was in Switzerland ‘offensively neutral’.  The poem reflects his pacifist irritation with both sides in the war.  This poem was not included in his “Collected Poems” published in 1936.