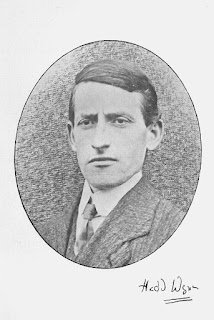 Ellis Humphrey Evans was born on 13th January 1887.  He was the eldest of eleven children born to Evan Evans and his wife Mary, nee Morris.  Evan was also a poet.  Ellis was brought up on the family farm near Trawsfynydd in Wales, where he worked as a shepherd after leaving school, during which time he wrote most of his poetry.

Ellis wrote his first poem at the age of eleven and won 6 Bardic Chairs for his poetry.  In 1910 he was allocated the name of Hedd Wyn, which translates into English from Welsh as 'blessed peace'.

Called up for military service in 1916, Ellis enlisted in the Royal Welsh Fusilier Regiment and was posted to the Western Front.  The war inspired Hedd Wyn's work and produced some of his most noted poetry, including Plant Trawsfynydd ("Children of Trawsfynydd"), Y Blotyn Du ("The Black Dot"), and Nid â'n Ango ("[It] Will Not Be Forgotten"). His poem, Rhyfel ("War"), remains one of his most frequently quoted works.
Hedd Wynn was killed on 31st July 1917, during the Battle of Passchendaele at Pickern Ridge.  Ellis was buried in Artillery Wood Cemetery, Boesinghe, Belgium.

A few weeks after his death, Ellis's poem won the Bardic Chair at the Eisteddfod, which was held in Birkenhead in 1917. The chair that year was made by a Belgian refugee.

A collection of Hedd Wyn's poems was published in 1918 under the title "Cerddi'r Bugail" (En. Tr. 'Poems of the Shepherd').  The photograph of Ellis is taken from that publication.
WAR by Hedd Wyn
Why must I live in this grim age
When, to a far horizon, God
Has ebbed away, and man, with rage
Now wields the sceptre and the rod?
Man raised his sword, once God had gone,
To slay his brother, and the roar
Of battlefields now casts upon
Our homes the shadow of the war.
The harps to which we sang are hung
On willow boughs, and their refrain
Drowned by the anguish of the young
Whose blood is mingled with the rain.
Translation by Alan Llwyd
© Alan Llwyd / Cyhoeddiadau Barddas
NOTE The Royal Welch Fusiliers (In Welsh: Ffiwsilwyr Brenhinol Cymreig) was a line infantry regiment of the British Army and part of the Prince of Wales' Division, founded in 1689 shortly after the Glorious Revolution. In 1702, it was designated a fusilier regiment and became The Welch Regiment of Fusiliers; the prefix "Royal" was added in 1713, then confirmed in 1714 when George I named it The Prince of Wales's Own Royal Regiment of Welsh Fusiliers. After the 1751 reforms that standardised the naming and numbering of regiments, it became the 23rd Foot (Royal Welsh Fuzileers).
The Regiment retained the archaic spelling of Welch, instead of Welsh, and Fuzileers for Fusiliers; these were engraved on swords carried by regimental officers during the Napoleonic Wars. After the 1881 Childers Reforms, its official title was The Royal Welsh Fusiliers, but "Welch" continued to be used informally until restored in 1920 by Army Order No.56.
Researching for the 2017 Exhibition was particularly poignant for me because my Great Uncle James was killed on the first day of the Battle of Arras - 9th April 1917 - which was Easter Monday that year.  Poets killed on that day include Canadian William Maunsell Scanlan, MC, MM and British poets Edward Thomas, R.E. Vernède and Walter Lightowler Wilkinson.
Hedd Wyn was among the poets included in the "Arras, Messines, Passchendaele & More" exhibition held at the Award-winning Wilfred Owen Story, on the Wirral Peninsula in the north west of England.  If you are planning a visit to the Wirral, please find time to visit the Futility statue in nearby Hamilton Square.   There is also a book of the exhibition:  http://www.poshupnorth.com/2018/07/arras-messines-passchendaele-more-poets.html