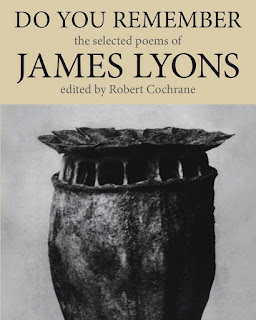 The poet Robert Cochrane, a graduate of Manchester Metropolitan University, has written a fantastic book about James Lyons which I urge you to read.  Robert has extensively researched James Lyons and reprinted some of his poems in a book entitled "Do you Remember - the selected poems of James Lyons", published by The Bad Press, Manchester in 2018.

James is featured in Catherine W. Reilly's "English Poetry of the First World War: A Bibliography" but the only details Reilly gives are that James was a Private in the Royal Army Medical Corps and that his WW1 poetry collections were "Sons of the Empire, and other poems" (Heywood, Manchester, 1916) and "Gleam o' pearls (poems)" (Cornish, Mancheter 1919).

Robert Cochrane has also produced a CD of some of the poems written by James Lyons set to music.