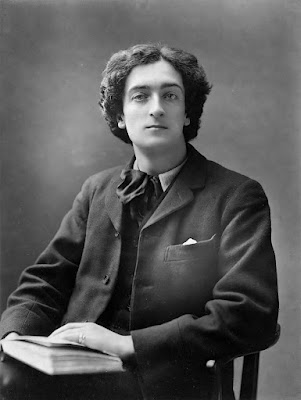 Richard was born Richard Thomas Gallienne in West Derby, Liverpool, UK on 20th January 1866. Educated at Liverpool College, he went to work as a clerk when he left school.  Richard was inspired to become a poet and to change his name when his father took him to a lecture given in Oxton, Birkenhead by Oscar Wilde.

Richard's first poetry collection - “My Ladies' Sonnets” -  was printed privately in 1887, and in 1889 Richard worked  briefly as literary secretary to British actor/playwright Wilson Barrett. In the summer of 1888, Richard met Oscar Wilde.  In 1891, Richard began work as a journalist for “The Star” newspaper.  He also contributed to “The Yellow Book”, a British magazine edited by Elkin Matthews and John Lane and published quarterly by The Bodley Head, London from 1894 to 1897.

Richard’s first wife, Mildred Lee, died in childbirth in 1894, along with their second daughter, Maria, leaving Richard to bring up their daughter Hesper. Rupert Brooke and Richard Le Gallienne met in 1913 on a ship bound for the United States of America.

In 1903, Julie left Richard, taking both of his daughters, and went to live in Paris. She later sent Hesper to live with her paternal grandparents in London, while Eva remained with her mother. Julie later cited Richard's inability to provide a stable home, pay his debts, his alcoholism and womanising as grounds for divorce and the couple were divorced in June 1911.

Richard moved to the United States and married Irma Perry, nee Hinton, in October 1911. Irma's daughter Gwendolyn Perry subsequently called herself Gwen Le Gallienne.  Richard, Irma and Gwen went to live in France and later Richard and Irma retired to |Menton in the South of France.  During the Second World War, Richard and Irma went to live in Monaco, as their house was requisitioned by the Germans and Richard refused to write propaganda leaflets for the Nazis.

Richard died on 15th September 1947 and  was buried in Menton.

In 2016 an exhibition to commemorate the 150th anniversary of Richard Le Gallienne’s birth, highlighting the life and works of Richard Le Gallienne was held at the Central Library in his home city of Liverpool, UK. Entitled "Richard Le Gallienne: Liverpool's Wild(e) Poet", it featured his affair with Oscar Wilde, his famous actress daughter Eva Le Gallienne and his personal ties to the city. The exhibition, curated by Dr. Margaret Stetz of Delaware University, ran for 6 weeks between August and October 2016 and a talk about him was held at the Victorian Literary Symposium during Liverpool's Literary festival the same year.

Richard was also featured in an exhibition of Merseyside Poets of WW1 held at the Award-winning Wilfred Owen Story in Argyle Street, Birkenhead, Wirral, UK.  There is a book of that exhibition: https://www.amazon.co.uk/s/ref=nb_sb_noss?url=search-alias%3Daps&field-keywords=Merseyside+Poets%2C+Writers+%26+Artists+of+the+First+World+War


War
I abhor,
And yet how sweet
The sound along the marching street
Of drum and fife, and I forget
Wet eyes of widows, and forget
Broken old mothers, and the whole
Dark butchery without a soul.