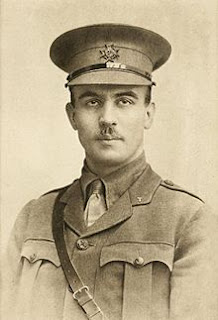 Educated in grammar schools in Dorchester and Ilkley, Yorkshire, Eric went on to study engineering at the University of Leeds, where he joined the Officers’ Training Corps (OTC).

During the First World War, Eric joined the Leeds Rifles, West Yorkshire Regiment and was commissioned as a Second Lieutenant.  He was posted to the Western Front where he was wounded and awarded the Military Cross (MC) for rescuing wounded soldiers under fire.

After his recovery, Eric returned to the war zone and was wounded again during the Battle of Thiepval in The Somme Offensive on 1st July 1916.   He became Town Mayor of Varennes and was promoted to the rank of Captain.

Eric was killed in action at Passchendaele on 9th October 1917 and is commemorated on the Thiepval Memorial, Somme, France, as well as on a plaque in Ben Rhydding Methodist Church, Ilkley, Yorkshire.

“To a Lark at Dawn between the Trenches” from “Sunrise Dreams, and Other Poems”

Thy song comes thrilling through the air
a glorious stream of melody—
A golden flood.
What precious chance has kept thee there.
Singing thy strains of faerie glee,
Where all is blood?
We cannot see thee, wondrous bird;
The dawn has scarce begun as yet;
The moon still high.
But friend and foe thy song have heard.
And none who hear it can forget
Nor check a sigh.
Because thy music, wildly sweet.
Seems still to call us from the ground
To soar and fly;
But we, alas, have leaden feet;
Unloveliness is all around.
Men fight and die.
’Tis no fit place for such high lore.
For we are bound, we cannot rise—
Till the blood mist clears.
But fly to him who launched the war.
Sing, sing to him and ope’ his eyes
To human tears.

Alas! poor sprite! thy fate with him
Were poor indeed. For one who wrongs
A world entire,
To glut ambition’s idle whim,
Will never hearken to thy songs
Of hallowed fire.
Then stay with us. The nightingale
Shall sing all night her sad, sweet dirge
For death and pain;
But Dawn thine own free voice shall hail.
And in the heart high Hope shall surge
And soar again.
And grim-faced men with weary eyes
Shall turn their thoughts from blood and strife.
Across the foam.
To where, beneath Old England’s skies.
Thy sisters sing of love and life
To those at home.