Poet of the Laurentians* 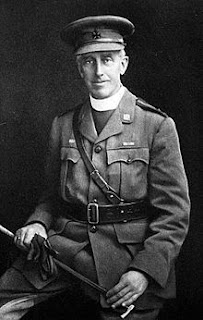 Frederick George Scott was born on 7th April 1861 in Montreal, Quebec, Canada. He gained a B.A. from Bishop's College, Lennoxville, Quebec, in 1881, and an M.A. in 1884, before going on to study theology at King's College, London in 1882. In 1884 he became a Deacon. In 1886, he was ordained as an Anglican priest at Coggeshall, Essex. He served first at Drummondville, Quebec, and then in Quebec City, where he became Rector of St. Matthew's Anglican Church.

In April 1887, Frederick married Amy Brooks and the couple has six children who survived.  Their son, F. R. Scott, also became a poet.

In 1914, well over the age of 50, Frederick volunteered to fight when war broke out.in. He attained the rank of Major and served as the Senior Chaplain to the 1st Canadian Division on the Western Front. Frederick’s son, Captain Henry Hutton Scott, 87th Battalion (Canadian Grenadier Guards), Canadian Infantry was killed during The Somme Offensive on 21st October 1916, at the age of 24, and is buried in Bapaume Post Military Cemetery.

After the war Frederick became Chaplain of the Army and Navy veterans.

During the Quebec Conference of 1943, Scott was invited by Winston Churchill and Franklin Roosevelt to a private meeting where he read some of his poetry.

In 1885, Frederick published “Justin and Other Poems” which were later included in “The Soul's Quest and Other Poems” (London 1888).
John Garvin included Frederick's poems in his 1916 anthology “Canadian Poets. Garvin said of Frederick : "Frederick George Scott, 'The Poet of the Laurentians,' has this supreme gift as a writer: the art of expressing noble, beautiful and often profound thoughts, in simple, appropriate words which all who read can understand. His poems uplift the spirit and enrich the heart."  "The Unnamed Lake" has been called his best-known poem.

Frederick had a poem included in  “Songs of the Great Dominion”. He was one of the Canadian ‘Confederation Poets", a group including Charles G.D. Roberts, Bliss Carman, Archibald Lampman and Duncan Campbell Scott.

In all Frederick Scott published 13 books of Christian and patriotic poetry.  Frederick’s WW1 collections were “The Gates of Time, and Other Poems” (London: Samuel Bagster & Sons, 1915) and “In the Battle Silences: Poems Written at the Front.” (Toronto: Musson, 1916)

WHAT is the gift we have given thee, Sister?
What is the trust we have laid in thy hand?
Hearts of our bravest, our best, and our dearest,
Blood of our blood we have sown in thy land.

What for all time will the harvest be, Sister?
What will spring up from the seed that is sown?
Freedom and peace and goodwill among Nations,
Love that will bind us with love all our own.

Bright is the path that is opening before us,
Upward and onward it mounts through the night:
Sword shall not sever the bonds that unite us
Leading the world to the fullness of light.

Sorrow hath made thee more beautiful, Sister,
Nobler and purer than ever before;
We who are chastened by sorrow and anguish
Hail thee as sister and queen evermore.

* The Laurentian Mountains are a mountain range in southern Quebec, Canada, north of the St. Lawrence River and Ottawa River.

The photograph is from “The Great War As I Saw It” by Frederick George Scott (F.D. Goodchild, Toronto, 1922), which is available as a down-load
https://archive.org/details/greatwarasi00scotuoft