With thanks to Charles Booth on Twitter for reminding me that I had not yet posted my research about Henry Chappell. 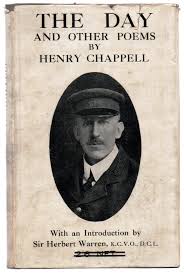 Henry Lang Chappell was born in 1874 in London, where his father ran a shop.  Henry Chappell’s family originally came from Cornwall and his Mother’s maiden name was Lang.

When war broke out, Henry wrote a poem entitled “The Day”, with which he achieved instant fame.  However, this was “…no sudden miracle or lucky accident” - if you look at the other poems in Henry's collection, he was obviously a very prolific poet.  "The Day" was published in the “Daily Express” on 22nd August 1914 and then as a broadside and postcard.  In the Introduction to Henry Chappell’s collection, Sir Herbert Warren says the poem was “reprinted in every paper in America” soon reaching “Canada, The Cape and Australia”.

According to Henry’s Great-Grandaughter, he gave the money he earned from that poem to the Red Cross.  Poems by Henry Chappell were published in eight WW1 poetry anthologies.

Henry Chappell’s WW1 collection “The Day and other poems”, with an introduction by Sir Herbert Warren, was published by The Bodley Head in 1918 is available as a free down-loan on Archive: https://archive.org/details/dayandotherpoem00warrgoog/page/n9 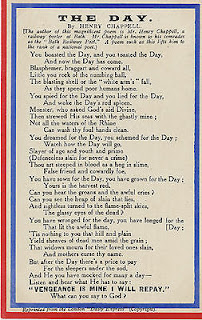 YOU boasted the Day, and you toasted the Day,
And now the Day has come.
Blasphemer, braggart and coward all,
Little you reck of the numbing ball,
The blasting shell, or the "white arm's" fall,
As they speed poor humans home.

You spied for the Day, you lied for the Day,
And woke the Day's red spleen.
Monster, who asked God's aid Divine,
Then strewed His seas with the ghastly mine;
Not all the waters of the Rhine
Can wash thy foul hands clean.

You dreamed for the Day, you schemed for the Day;
Watch how the Day will go,
Slayer of age and youth and prime,
(Defenceless slain for never a crime),
Thou art steeped in blood as a hog in slime,
False friend and cowardly foe.

You have sown for the Day, you have grown for the Day;
Yours is the harvest red.
Can you hear the groans and the awful cries?
Can you see the heap of slain that lies,
And sightless turned to the flame-split skies
The glassy eyes of the dead?

You have wronged for the Day, you have longed for the Day
That lit the awful flame.
'Tis nothing to you that hill and plain
Yield sheaves of dead men amid the grain;
That widows mourn for their loved ones slain,
And mothers curse thy name.

But after the Day there's a price to pay
For the sleepers under the sod,
And He you have mocked for many a day --
Listen, and hear what He has to say:
"VENGEANCE IS MINE, I WILL REPAY."
What can you say to God?