With thanks to Keith Johnson for his help in finding information about Frederick, who was Keith’s Grandfather, and for permission to share the information with you.  Keith has written a book:

“Shakespeare’s English : A Practical Linguistic Guide” by Keith Johnson - dedicated to the memory of his grandfather, Frederick Charles Owlett, whose lifeblood was the Elizabethan writers, particularly Shakespeare and Marlowe. In the nineteen-thirties Frederick set up the Globe-Mermaid Association with the intention of having the Globe Theatre rebuilt in London. The Second World War put paid to his efforts. Sam Wanamaker was, later, more successful. Routledge Taylor & Francis Group Ltd., 2 Park Square, Milton Park, Abingdon Oxford, OX14 4RN. 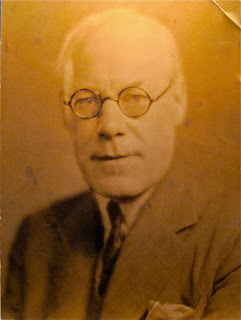 In 1905 Frederick married Annie Jones in Staines, Middlesex.  By 1911, Frederick and Annie were living in Mentone Villas Clarendon Road Ashford Middlesex and had three children.

During the First World War, Frederick initially joined the Royal Navy and then on 18th July 1917, he transferred to the Royal Flying Corps, which became the Royal Air Force on 1st April 1918.

In the years bewtween the wars, Frederick travelled to the United States of America several time.  In 1939, he lived in Chelmsford, describing himself as an author. Frederick died in January 1965 in Lewisham. 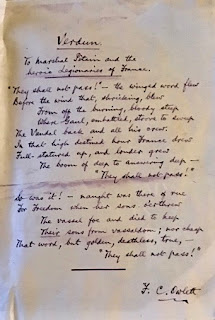 Frederick’s Grandson tells me that the poem “Verdun” was engraved on the Verdun WW1 Memorial but I haven’t been able to verify that.  It seems the original memorial may have been destroyed during WW2 and re-built afterwards. 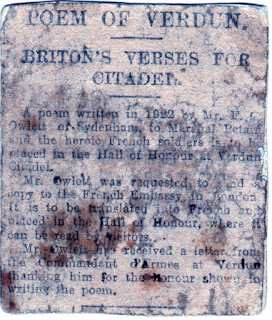 If anyone knows anything about the inclusion of the "Verdun" on the French War Memorial, please get in touch.