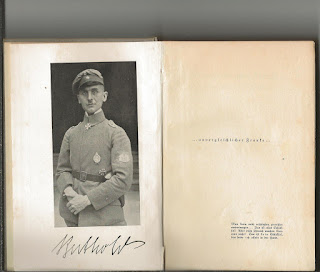 Thor Goote was the Pen-name of Werner Schultze von Langsdorff, who was born on 27th May 1899 in Forbach, Lothringen, which is now a commune in the Department of Moselle in the northeastern area of France.  It is located on the German border near Saarbrücken, Germany

Werner was the son of a nobleman and Army officer from Hesse. During the First World War, he volunteered to serve in the German army and joined an Artillery Regiment. He was wounded, after which he joined the German Air Force with the rank of Lieutenant. Werner was awarded the Iron Cross Ist Class.

In 1919 Werner enrolled on a course to study aeronautical engineering at Darmstadt Technical University, graduating in 1923 as an engineer with a doctorate  - Dr.-Ing.  He then worked as a freelance engineer and test pilot and published numerous books and essays. He also published “The Yearbook of Aviation” and “The Aviation Handbook”. Werner sustained serious injuries in an aircraft crash in 1928 amd had to wait until 1936 before he was allowed to fly again.   He then taught aeronautical engineering and aviation at Karlsruhe Technical University.

During the 1920s Werner joined the Nazi Party and worked as a civil servant in the National Socialist Air Corps.

In 1939, Werner was called up to serve in a fighter squadron, after which he was in the research department of the Technical Office of the Reich Ministry of Aviation. In 1940 he requested a transfer to a combat squadron and joined a reconnaisance unit.  He was killed on 3rd July 1940 when his plane crashed  in the North Sea off the coast of Scotland.