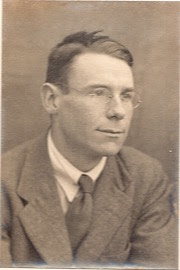 The Rev. Bonner died when George was just 4 years old, and he and his brother, Austin, were brought up by their mother.

George was educated at King Edward’s School in Birmingham, where he was a Prefect, edited the School Magazine and a contemporary of J.R.R.Tolkien. He then went up to Magdalen College, Oxford University but, at the outbreak of war, postponed his studies and joined the South Staffordshire Regiment.  He transferred to the Royal Field Artillery in 1915 and was commissioned as a Subaltern.  He was sent back to Britain in November 1916, suffering from Shell Shock and was sent to Craiglockhart Hospital in October 1917, where he became editor of “The Hydra” magazine after the magazine’s previous editors, Wilfred Owen and J.B. Salmond, had left.

George’s brother, Augustine Bonner, joined the Royal Flying Corps and was killed in 1917 over France.

George married Eleanor Ford in 1921 and they had one son, Augustine, known as Austin, born in 1925 and named after George’s brother.  After the war, George became a journalist.

George had a poem published in the Basil Blackwell anthology “Oxford Poetry 1920”, edited by Vera Brittain and others.

Research into the life and work of George Bonner is by writer, editor, researcher John Garth, who met Bonner’s son, Austin shortly before his death.  Austin handed most of his father’s papers over to Magdalen College, where he had also been an undergraduate. John Garth went to look over the Hydra issues with Dr Stuart Lee, director of the First World War Poetry Digital Archive. They provide a fascinating glimpse into a lost world, in which traumatised officers understandably fell back on the comfortable certainties of life as they had known it before the war. The Hydra reads like a school or college magazine, and reports enthusiastically, and often with gentle wit, on the clubs and pastimes fostered by the hospital inmates: debates, literature, poultry-keeping, sports, model boats, photography and gardening.

In George Bonner’s editorial in Hydra of January 1918, he wrote: ‘Our late Editor, Mr Owen, has reduced the Antaeus saga to blank verse. This poem we hope to print in our next number.’ The poem does not appear in the newly-found issues, and perhaps was never published in Owen’s lifetime. But Owen did write an article in the January 1918 issue of The Hydra about the Greek myth of Antaeus, saying: ‘Now surely every officer who comes to Craiglockhart recognises that, in a way, he is himself Antaeus who has been taken from his Mother Earth and well-nigh crushed to death by the war giant or military machine . . . Antaeus typifies the occupation cure at Craiglockhart. His story is the justification of our activities.’

Antaeus, in Greek mythology, was a giant from Libya. He was the son of the sea god Poseidon and the Earth goddess Gaea. He compelled all strangers who were passing through the country to wrestle with him.