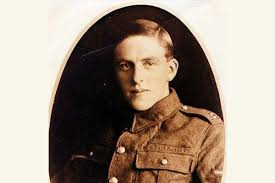 Harry Fellows was born in Nottingham on 5th May 1896.  His father was Edward Fellows, a coal miner, and his mother was Mary Ann Fellows, nee Hough.   Harry had the following siblings:  Doris, Edward and Frank S.  Their mother died in 1911 at the age of 42.  Harry went to work initially as a butcher’s delivery boy and then for Raleigh the cycle manufacturers.

Harry’s father died of pneumonia in 1914 at the age of 47, leaving Harry in charge of his siblings.  His sister went into service and Harry made arrangements for his two brothers to be looked after by some relatives in Melton Mowbray.   When war broke out, Harry joined the Army, in spite of being a year under the official age.   Given the choice of the Notts & Derby Regiment or the Northumberland Fusiliers, Harry chose the latter and travelled to Newcastle for training.   He became a Private in “C” Company, 12th Battalion, Northumberland Fusiliers, 62nd Brigade, 21st Division.

Harry saw action on the Western Front at Loos and on The Somme at Fricourt and Mametz.  In March 1917, he was on the Bapaume to Arras Road near Boiry-Becquerelle, where he narrowly escaped death.  During the Battle of Bullecourt in June 1917, Harry was badly wounded and sent back to hospital in Britain via Rouen, Le Havre and Southampton.

Once recuperated, Harry returned to the Western Front to Etaples where he was placed on permanent burial duty. During the First World War, Etaples had a large British Army base training camp, a hospital and a cemetery.  Harry transferred to the Royal Flying Corps, where he was able to put his pre-war experience at Raleigh to good use repairing motor cycle wheels before being demobilised in March 1919.

After the war, Harry went back to work for Raleigh where he stayed until he retired in 1962.   In 1984 Harry returned to the Western Front to visit the graves of his comrades who fell in battle.  At Lochnagar Crater, Harry met the Marquis de Thezy, owner of Mametz Wood and the two became friends.  Harry became an active member of the Friends of Lochnagar.

Harry died on 1st September 1987, soon after attending the 1st July service at Lochnagar Crater.   His funeral was filmed by a French film crew and is part of a film presentation at the Musée Historial in Peronne, France.  Harry’s ashes were buried in Mametz Wood on 13th March 1988 and a memorial stone erected.

What are your thoughts as you wait in a trench?
Awaiting the whistle to blow,
Are you anxious, nervous, shaking with fear?
Or are you ready to go?
No one is eager to go my friend!
It’s a task that must be done,
Discipline bids us obey the rules
But for many their last day has come.

Dick Turnbull, the oldest and lone married man
With a wife and two little bairns,
We all know Dick’s worry, ‘can wor lass’ cope
With her allowance and pittance she earns.
He had a long letter in yesterday’s mail
With no hint of the trouble he fears
The ink on the paper was stained quite a lot,
Could these stains have been caused by her tears?

That’s how it feels to stand in a trench
Awaiting the whistle to blow,
These are the thoughts that pass through our heads
Emotions we’re not keen to show.
All men react in different ways
A few to heroics aspire
But if a man should boast, that he never knew fear,
Then in my book, that man is a liar!

'REFLECTIONS of a Veteran: HARRY FELLOWS: His Life and His Poems', plus a CD of Harry talking about his experiences in Mametz Wood, can be purchased for £10 (postage and packing included). Cheques made payable to 'The Friends of Lochnagar' and sent to George Heron at 8 Glendue Close, Nunthorpe, Middlesbrough, Cleveland, TS7 0QN. For further information, George can be contacted by email: heron4547@msn.com.

With thanks to George Heron for all his help.