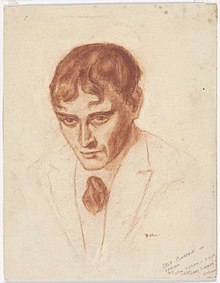 Known to friends and family as Bill, William Henry Dyson was born in Alfredton, now in Ballarat, Victoria, Australia, on 3rd September 1880. His father was George Dyson, a hawker who became a mining engineer, and his mother was Jane Dyson, née Mayall.  Educated at state schools in Ballarat and South Melbourne, Will became an artist like his brother, Ambrose (1876 – 1913), and went to work for the “Adelaide Critic”.

In 1910, Will married Ruby Lindsay.  Ruby came from a well-known family of artists. The couple went to live in London and Will found work with the “Weekly Despatch”. He also drew some coloured cartoons for "Vanity Fair" magazine, which he signed with the pen-name "Emu". Some time later, he began to contribute to the British newspaper “The Daily Herald” (1912 – 1964). His work soon became popular and in 1914, Will published some of his work in a publication entitled “Cartoons”.   In 1915, he was made an official Australian War Artist on the Western Front.

Will was not concerned with his personal safety and was wounded twice while sketching on the Western Front.  Exhibitions of his work were held in London.  In November 1918, Will published a book of his work entitled “Australia at War”.

Ruby died in March 1919 and Will was overcome with grief. Not long after his wife's death, Will drew a cartoon, entitled "Peace and Future Cannon Fodder", which was remarkable in its uncanny foresight.  Published in “The Daily Herald” on 13th May 1919, the cartoon depicted David Lloyd George, Vittorio Orlando and Georges Clemenceau (the Prime Ministers respectively of Britain, Italy and France), together with Woodrow Wilson, (the President of the United States), emerging after a meeting at Versailles to discuss the Peace Treaty. Clemenceau, who was identified by his nickname "The Tiger", is saying to the others: "Curious! I seem to hear a child weeping!" A child in tears stands behind a pillar and a poster proclaims "1940 Class". 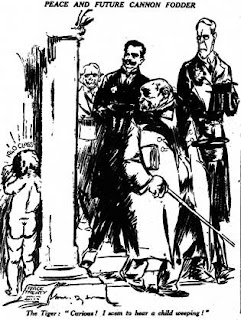 In 1920, Will published some of Ruby’s work – “Drawings of Ruby Lind (London, Cecil Palmer 1920) and he also published a volume of his poems – “Poems in Memory of a Wife”.

Will then took up dry pointing and he quickly mastered the possibilities of that medium. In 1925, he returned to Australia for five years and worked for th “Melbourne Herald” and “Punch”.  After a successful exhibition of his dry point creations in New York, Will held an exhibition in London.  He worked again for "The Daily Herald" while there.  Will died on 21st January 1938.  He and his wife are buried together in Section D10 of Hendon Cemetery in London NW7.

“Surrender” a poem by Will Dyson

Now wrap you in such armour as you may,
And make your tardy peace with suffering,
Since grief must be your housemate to the end ...
Nor is it meet that in these bloody years
Such traffic you should make of common wounds.
What is your grief above our mortal lot
That in a world where all must carry scars,
You clamour to the skies as though were fall’n
A prodigy to earth in this your woe.
Now make your peace, and go as you have gone:
The world was so before this grief befell,
But you, the broken, have in breaking learned
A wisdom that you lacked when you were whole.
... in your veins no flavoured stuff doth flow
That fate should beat upon your head in vain.
... Now bend thee to the yoke,
And teach thy heart no longer to rebel.