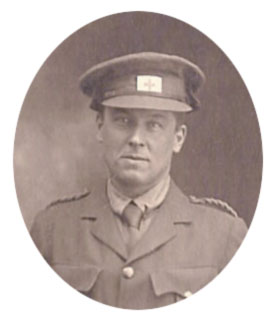 Robert and his brother John were sent to live with their three aunts and their paternal grandfather in Kilwinning, Scotland. The boys were reunited with their parents in Glasgow and Robert was educated at Hillhead High School, after which he began work at the Commercial Bank of Scotland.  Robert began writing poetry at an early ag.

When he was 21, Robert went to Vancouver in Canada and he travelled around North America for a while doing odd jobs and writing. He also visited Mexico.

Robert’s poems about the Boer War were published in “The Colonist” in 1900. It seems that at that time his brother John may have been in the British Army and taken prisoner of war at the same time as Winston Churchill.

During the Balkan Wars, Robert was a war correspondent for “The Toronto Star” and in 1913 he went to live in France, settling in Paris on the West Bank of the River Seine. He married Germaine Bourgoin and the couple settled in Brittany in France.

When war broke out in 1914, Robert tried to enlist in the British Army but was turned down because he had Varicose Veins. He was a friend of John Buchan, who suggested Robert join the Officers Training Corps (OTC) scheme and apply for a commission but Robert did not want to be an officer. Instead, he joined the Ambulance Corps of the American Red Cross as a Stretcher Bearer and served on the Western Front. While recuperating in Paris after an illness, Robert wrote and published “Rhymes of a Red Cross Man”, which he dedicated to his brother, Lieutenant Albert Service, who served with the Canadian Infantry on the Western Front and was killed in action in August 1916.

During the Second World War, Robert and his family narrowly escaped being arrested by the Nazis because of Robert’s satirical verses about Adolf Hitler and they went to live in Canada. After the war, the family returned to France and in 1947 went to live in Monaco.

Robert died in Lacieux, Brittany, on 11th September 1958 and was buried in the local cemetery.

Robert’s WW1 poetry collection “Rhymes of a Red Cross Man” was published in Toronto by William Briggs in 1916.

Robert Service is remembered on a blue plaque on Christian Road in Preston, near to the house in which he was born. 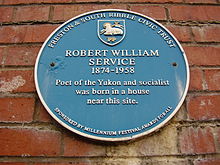 Photos:  Robert Service in the uniform of the American Red Cross , 1915.  Plaque in Preston, Lancashire, UK

From wrath-red dawn to wrath-red dawn,
The guns have brayed without abate;
And now the sick sun looks upon
The bleared, blood-boltered fields of hate
As if it loathed to rise again.
How strange the hush! Yet sudden, hark!
From yon down-trodden gold of grain,
The leaping rapture of a lark.

A fusillade of melody,
That sprays us from yon trench of sky;
A new amazing enemy
We cannot silence though we try;
A battery on radiant wings,
That from yon gap of golden fleece
Hurls at us hopes of such strange things
As joy and home and love and peace.

Pure heart of song! do you not know
That we are making earth a hell?
Or is it that you try to show
Life still is joy and all is well?
Brave little wings! Ah, not in vain
You beat into that bit of blue:
Lo! we who pant in war's red rain
Lift shining eyes, see Heaven too

From "Rhymes of a Red Cross Man"

With thanks to Geoff Harrison for finding this link to some of Robert’s work: http://www.gutenberg.org/cache/epub/315/pg315.txt