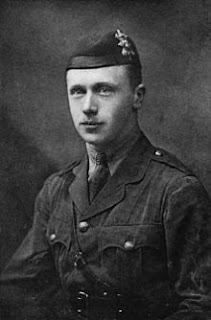 “My thoughts in this small booklet lie,
The windows of my inner eye.” – H.M.
“Songs are my life; my life’s a song always,
Into my verse I pour my very soul.”  Hamish Mann
Alexander James Mann was born in Broughty Ferry, Dundee, Forfarshire, Scotland on 5th April 1896. His parents were Alexander Mann and his wife Charlotte, and his siblings were David, Jeanie, Isobel and Alan.

Alexander was educated at Grove Academy, Broughty Ferry, where he  is remembered on the school’s war memorial, and George Watson’s College, Edinburgh, after which he worked as a journalist.
At the start of the war, Alexander assisted at Craigleith Military Hospital, where he joint edited the hospital's magazine “The Craigleith Chronicle”, contributing some of his work. He also had poems published in other Scottish publications under the pen-name ‘Lucas Cappe’.   He also used the pen-name Hamish Mann, by which he is now mainly remembered.
Commissioned as a Second Lieutenant in July 1915, Alexander joined the 8th Battalion of the Black Watch and was posted to France in August 1916, taking part in the Somme Offensive.  During the first day of the Battle of Arras on 9th April 1917, Alexander was badly wounded by a shell. He died the following day and was buried in Aubigny Communal Cemetery Extension, 62045 Aubigny-en-Artois, Pas de Calais, France.
Alexander’s brothers also served in WW1 - Captain Allan Cowan Mann, M.M. & Bar, M.i.D. twice, Royal Army Medical Corps and Captain David Mann, Royal Army Medical Corps;  both his brothers returned home safely.

Alexander’s WW1 poetry collection “A Subaltern’s Musings” was published by his parents after his death by John Long, London in 1918 and five of his poems were included in "From the Line: Scottish War Poetry 1914 - 1945" edited by David Goldie and Roderick Watson (Association for Literary Studies, Glasgow, 2014)/
“The Shell Hole” 10 September 1916 by Hamish Mann

In the Shell Hole he lies, this German soldier of a year ago;
But he is not as then, accoutred, well, and eager for the foe
He hoped so soon, so utterly, to crush. His muddy skull
Lies near the mangled remnants of his corpse – war’s furies thus annul
The pomp and pageantry that were its own. White rigid bones
Gape through the nauseous chaos of his clothes; the cruel stones
Hold fast the letter he was wont to clasp close to his am’rous breast.
Here, ‘neath the stark, keen stars, where is no peace, no joy, nor any rest,
He lies. There, to the right, his boot, gashed by the great shell’s fiendish whim,
Retains – O horrid spectacle! – the fleshless stump that was his limb!
Vile rats and mice, and flies and lice and ghastly things that carrion know
Have made a travesty of Death of him who lived a year ago.
Sources:
Catherine W. Reilly “English Poetry of the First World War: A Bibliography” (St. Martin’s Press, New York, 1978), p. 216 - which incorrectly calls  him Arthur James Mann
Find my Past
https://www.greatwardundee.com/entry/alexander-james-mann/
https://www.greatwardundee.com/entry/alexander-james-mann/
With thanks to John Seriot for additional information about Alexander's poems.