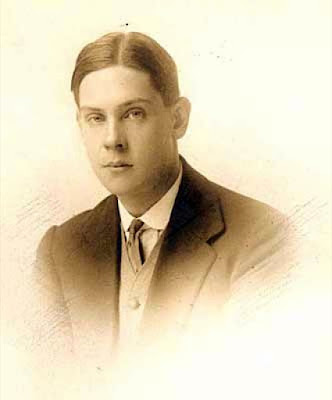 Thomas was born on 26th April 1897 in King’s Norton, Worcestershire. His parents were Thomas Evans Mitton, an engineer and engine manufacturer, and his wife Mabel, nee Tolkien.  Mabel’s brother, Arthur Rueul Tolkien, was J.R.R. Tolkien’s father. Thomas had a sister, Hilda Mary, born in 1883, a sister Ethel Grace, born in 1882, and a brother Eric John, born in 1888.

Thomas was educated at Wintersloe preparatory school then went as a Foundation Scholar to King Edward’s School (KES) in January 1911, the same year that his cousin J.R.R. Tolkien was leaving the school to go up to Oxford University.   While at KES, Thomas joined the Officers’ Training Corps (OTC).

In 1911 the Mitton family lived in Yardley, Warwickshire,Thomas was a pupil at King Edward’s School in Birmingham, and his brother Eric was working for his father’s engineering company.

Thomas joined the Royal Engineers and was killed in an accident while repairing telephone wires on 24th December 1917.  He was buried in Dunhallow A.D.S. (Advanced Dressing Station) Cemetery, near Ypres, Flanders, Belgium.

Thomas is also commemorated at the Baptist Church in Oxford Road (now the Calvary Church of God in Christ), Moseley, B13 9EJ, at St Mary’s Church, Handsworth, St Agnes Church in Moseley and at King Edward School in Edgbaston. His name is also inscribed on the Roll of Honour at Birmingham’s Hall of Memory

Far beyond the reeking battle,
Where all human factions cease,
Her bright eyes bedimmed with weeping
Stands the gentle form of Peace.
And she calls to toiling mortals
Children see ye grieve me sore,
Drive me from your happy homesteads
Stain your hands with lusts of War.
To the weeping maid they answer,
Lady, hear us when we plead,
For we turn from thee with sorrow
Turn to break a tyrant’s greed.
And we vow that good shall follow
From our strife and warfare vile,
And thy reign shall be fairer
Though we leave thee for a while.