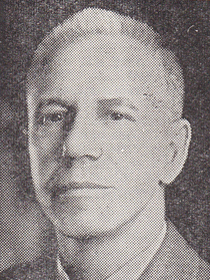 Harry Amoss was the pen name of Harold Edwin Amoss, who was born on 22nd April 1890 in Corinth,Ontario, Canada. His parents were James Amoss, a teacher, and his wife, Annie, nee Hockey.  Like his father, Harry also studied to become a teacher.

After the war, Harry returned to Canada and to teaching.  He died in February 1965. 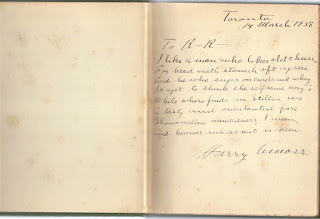 A dedication Harry wrote in one of his books.


Here is a passage from Harry’s poem "Passchendaele 1917":

… war has stripped illusions Buddha-wise
Has tossed the tinsel on the winds astrew,
And with gaunt fingers rent the robes of pride
Till life in naked worth confronts the eyes

Harry's WW1 poetry collection was “Prayer of the Good Trouper and Other Poems” (Ryerson, Toronto, 1933).

“By the end of the war, some 619,000 Canadians had enlisted in the Canadian Expeditionary Force for service overseas. This was an enormous contribution from a country with a population of just under 8 million in 1914. Approximately 7% of the total population of Canada was in uniform at some point during the conflict, and hundreds of thousands of additional Canadians worked on the home front in support of the war effort.

While initially consisting mostly of white British-born Canadians, the Canadian Expeditionary Force also included other cultural groups: aboriginals of the First Nations, black Canadians and Americans, and even West Indians from the island of Bermuda.”