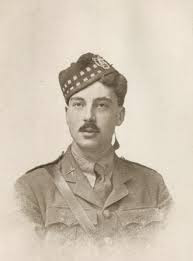 Born in London on 30th April 1896, Eugene’s parents were John William Crombie, MP, of Balgownie Lodge, Aberdeen, and his wife, Minna Crombie, nee Wilson, daughter of the Rt Hon. Eugene Wason, MP for Clackmannan and Kinross.   Eugene had a sister.  He was educated at Summer Fields School and Winchester College, where he joined the Officers’ Training Corps (OTC).

Eugene died on 23rd April 1917 at a Casualty Clearing Station, of wounds received during the Battle of Arras.  He was buried in Duisans British Cemetery, Etrun, France, Grave Reference IV. A. 22.

Walking my dream-paved road on the Hill of Desire
I saw beneath me the City of Quiet Delight;
The warming rays from each home-welcoming fire
Wove a pattern of gold on the velvet curtain of night.

The scent from the hill's rank grass put desire in my soul
To attain to the City below in the Valley of Hope,
But my grey path led beyond the horizon's roll.
Binding my feet in the web of a dream-made rope.

Reluctant, I followed the path, where I knew was Pain,
The distance glared with a furnace glow in the sky.
And the voice of the sea and the splashing of tropic rain
Were the hiss of the steam from untaught Machinery.

My dream-path led through the Furnace, and Pain, and Fire—
I could not stay nor turn from the road in flight—
But I knew it would lead me back past the Hill of Desire
To the warm hearth-stones in the City of Quiet Delight.

Eugene Crombie’s poems were included in three WW1 poetry anthologies. The above poem was from “Soldier Poets: Songs of the Fighting Men”, edited by Galloway Kyle (Erskine Macdonald, London, 1917).