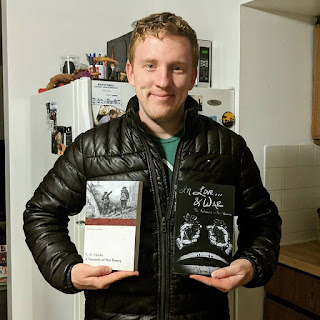 “…Bitter is the flavor
Of a face without a clock”

American Veteran and poet, writer and journalist Luke Ryan put a post on Facebook about this anthology and a WW1 anthology that reached him on the same day.  Luke said he was “struck at some of the similarities” between the poems written 100 years ago and those written recently by military personnel. As I have been researching WW1 poetry in depth since 2012, I just had to get a copy of “In Love… & War.”

Luke was right - I found the poems profoundly moving and thought-provoking.  I was pleased to see that poems by both men and women military personnel have been included.  I learnt a lot too – as a Brit who has never visited the USA, there were mentions of flora and fauna I had never heard of.  And I was reminded that what we call “The Last Post” is called  “Taps” in America.  More importantly, the book is a reminder of how vital it is to have a programme of aid for veterans of conflict.

There are three sections – “Preludes & Prologues”, “In Love & War” and “Epilogues & Epitaphs" and some fantastic illustrations by Justin Craine. But I don’t want to give too much away because I really want you to read this book.

To my mind this anthology highlights and continues the legacy of war poets such as Wilfred Owen, Siegfried Sassoon and the many others who fought during the First World War.  It surely demonstrates that, far from being dead, poetry is alive and well and still fulfilling the emotional needs of both reader and writer. That would have pleased the British war poet A.E. Houseman, who  gave a lecture in 1933 affirming that “poetry should appeal to emotions rather than to the intellect”.

One hundred percent of the profits from the sales of this book go to
GallantFew, a veteran-run charity in America, whose mission is to facilitate a
peaceful, successful transition from military service to a civilian life
filled with hope and purpose.  Rather like Combat Stress in the UK.

For further information and to purchase a copy of the anthology please go to https://deadreckoningco.com/

Photograph:  Luke Ryan with both the poetry anthologies.  Luke has a poetry collection due out soon - I can't wait to read it.