Edmond Rostand was one of the poets featured in the Poets of 1918 Exhibition held in 2018. 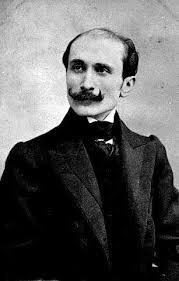 Educated initially in Marseilles, Edmond went to Paris in 1884 to the Stanislas College, following which he enrolled to study law.


Edmond married Rosemonde Gérard, who was also a poet, on 8th April 1890 in Paris.  The couple had two sons – Maurice, born in 1891, who became a poet, and Jean, born in 1894, who became a writer and biologist.  In 1897, when Edmond was 29 years old, he published his most famous work “Cyrano de Bergerac”.  He was electected to the Académie française in 1901.

In 1915, Edmond left his wife to be with the actress Mary Marquet.

During the First World War, Edmond tried to enlist in the French Army but was rejected.  He then threw himself into helping the French soldiers (Poilus), raising funds and becoming a medical orderly in the Pays Basque area, working close to the Front several times. When the Armistice was announced, Edmond went to Paris to be among the people and there he contracted Spanish Flu.

Edmond died on 2nd December 1918.  He was buried in the Saint-Pierre Cemetery in Marseilles. 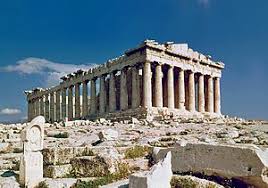 All they did was make it a little more immortal
A work of art doesn’t cease to exist because it’s destroyed by a moron
Ask Phidias and ask Rodin
Whether seeing their work we don’t say “That’s it!”.

A fort dies when we dismantle it
But a ruined church is always beautiful
And, looking upwards, we recall how the roof looked
But prefer to see the sky rather than stones full of holes.

Let us give thanks to those who aimed their stupid cannon
Since the result of their action is shame on them
But for us the building has become a Parthenon. 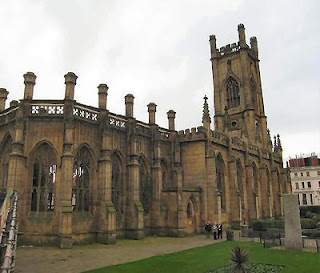 St Luke's Church in Liverpool was badly damaged during an air raid on the City in 1941.  The building has been cleaned but left as a Memorial to the Futility of War.

Move him into the sun -
Gently its touch awoke him once,
At home, whispering of fields half-sown.
Always it woke him, even in France,
Until this morning and this snow.
If anything might rouse him now
The kind old sun will know.

Think how it wakes the seeds—
Woke once the clays of a cold star.
Are limbs, so dear-achieved, are sides
Full-nerved, still warm, too hard to stir?
Was it for this the clay grew tall?
—O what made fatuous sunbeams toil
To break earth's sleep at all?