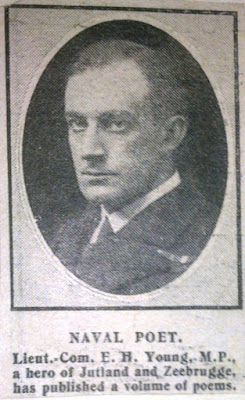 The boys had a sister who died in her early teens. The family lived in Cookham, Berkshire and had a house in London, near Sloane Square.

Educated briefly at Marlborough, Hilton went to Eton College before going up to Trinity College, Cambridge, where he was President of the Cambridge Union. He then read law and was called to the Bar in 1904. In 1908 Hilton became Assistant Editor of “The Economist” and in 1910 Editor of “The Morning Post”.

Hilton joined the Royal Naval Volunteer Reserve and was commissioned as an officer in September 1914. He served aboard several Royal Naval vessels, including HMS “Iron Duke”, HMS “Aurora”, HMS “Centaur” and HMS “Vindictive”, gaining the rank of Lieutenant Commander.

In February 1915, Hilton was elected Liberal MP for Norwich in a By-election.

Hilton was wounded while serving aboard HMS “Vindictive” during the Zeebrugge Raid which took place on 23rd April 1918. The aim of the Raid was to try to block the entrance to the Belgian harbour, which was being used as a base for German U-boats. As a result of his wound, Hilton had to have an arm amputated. After his recovery, he volunteered for active service and commanded an armoured train near Archangel during the Russian Campaign. 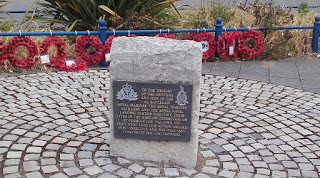 After the war, in 1921 Hilton became Financial Secretary to the Treasury of the British Government and served as a Minister several times. His book “System of National Finance” was in use until the 1950s.

In 1922, Hilton married Kathleen Scott, who was the widow of Captain Robert Falcon Scott, who died during an expedition to the Antarctic in 1912, and he became step-father to Peter Scott, the naturalist. Hilton and Kathleen had a son, Wayland, who was born in 1923. In 1926 Hilton joined the Conservative Party and he was elected MP for Sevenoaks in Kent in 1929. The title First Baron Kennet was bestowed on Hilton in 1935.

Hilton died on 11th July 1960, when the title then passed on to his son, Wayland, who became the Second Baron Kennet.

Hilton's poem ‘At The Gate’ was written aboard HMS “Vindictive” en route for Zeebrugge on 23rd April 1918.

” It is all over; all my travelling
in changing, curious time ; and I
of every vital thing that life can bring
have only left, to die.

I have no hope, no fear for my distress.
There is no man on earth so free.
Hope cannot vex one that is futureless ;
fear ends in certainty.

No hope, no fear, no triumph, no regret,
but darkness of the gathering shades.
What have I left to hold for comfort yet,
now that the daylight fades ?

I will think of all good things that I have known,
of everything that I loved best.
I will take all their beauty for my own
to be my strength and rest.

Stand by me now, all tranquil memories !
the firelit ceiling’s shadow-press
a waking child has watched in ecstasies
of drowsy happiness.

The long, wet orchard grass, the swift mill-race,
the shining blossom on the bough,
the lads that came there for a bathing-place,
dear lads ! stand by me now !

And one high verge of upland ; when the night
was falling on the fields beneath,
thence could the poised spirit take its flight
far beyond time and death.

The time is come : and last, to be my guide
through this dim ending of the way,
I take the hero-soul of one who,died,
and, living, lit the day.

O friend I loved, I raise in thoughts of thee
the heart that beat at one with thine.
There is a sound of guns upon the sea ;
now, Miles, thy hand in mine ”