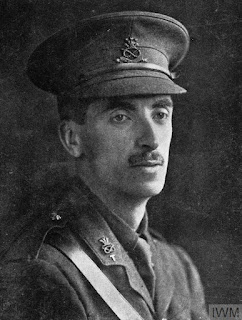 Charles John Beech Masefiled was born on 15th April 1882 in Cheadle, Staffordshire.  His parents were John Richard Beech Masefield, a solicitor, and his wife, Susan Masefield, nee Blagg.  Charles was a cousin of the poet John Masefield, who served with the Red Cross in France during WW1,

Educated at Repton School before becoming an articled clerk in the family’s law firm, Charles went on to qualify as a solicitor.

Commissioned into the 5th Battalion, The Prince of Wales North Staffordshire Regiment as a Second Lieutenant, Charles was posted to France in March 1915 and served during the Somme Offensive in 1916.  He was awarded the Military Cross for gallantry while leading his men during a raid at Cité sur Laurent, near Lens, France, on 14th June 1917. Wounded at Lens on 1st July 1917, Charles was taken prisoner of war by the Germans and died the following day.

Charles was buried in Cabaret-Rouge British Cemetery, Souchez, France.  He is also commemorated on a family headstone in Cheadle Cemetery, Staffordshire.

The WW1 poetry collections of Charles John Beech Masefield were:


To need any more the skies or man to importune
For us departing to-day with spirits at peace,
Now that the inner warfares, that tire men, cease
For us the chosen of God's lot, the spoilt darlings of Fortune.

Against the beasts in men let loose from their cages
We go forth with a lightened and proud heart,
We who are the men summoned to a high part,
To be known of the envious youth of unborn ages.

We have feared old Death, but now have we learned our error,
Seeing him there in the mire us so kindly await
A comrade befitting the hour of a world's fate,
And we look him full in the eyes ; we are rid of our last terror.

True that Death is an ill, but the worse ills are many;
Shame and slow rotting, cold and greasy years,
Pride in dishonour these things hold our fears;
We can play pitch and toss with our lives as a boy with a penny.

We have spent ourselves to win us a lady's favour,
But now the spending is grown to a leaping fire,
And winning for ourselves seems but a strange desire;
Her eyes -are remote as stars ; her kisses have lost their savour.

We have put life away and spurn the ways of the living;
We have broken with the old selves who gathered and got,
And are free with the freedom of men who have not;
We partake the heroic fervours of giving and again giving.