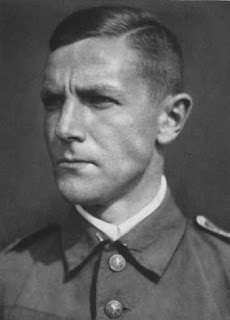 Richard Euringer was born in Augsburg in Bavaria, Germany on 4th April 1891.   He was educated at the local grammar school.  When he began publishing poetry, Richard used the pen name Pen-name Florian Ammer.

During the First World War, Richard joined the German Air Force and served as a pilot on the Western front from 1914 until 1916.   He fought with the Turkish Army in Mesopotamia, before returning to Germany to take command of the Flying School in Lechfeld in Bavaria, Germany.

During the 1930s, Richard joined the Nazi Pary and began working for the “Völkischer Beobachter”, which was a Nazi newspaper.  By 1936, he was a member of the advisory boards for writing and broadcasting in the Third Reich.   Richard’s book about his experiences as a pilot in two world wars, “Als Flieger in zwei Kriegen,” was published in 1941 by Philipp Reclam Jr., Leipzig.

Source: https://de.wikipedia.org/wiki/Richard_Euringer
Posted by Lucy at 04:43