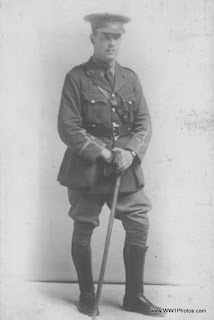 The Jenkins children were educated in England, where they lived at the family home in Littleham, Exmouth, Devon. Elinor attended Southlands School in Exmouth.  In 1912, following the death of their father, the family went to live in Kew.

Arthur was educated at Marlborough College, where he became Head Boy. He was a keen athlete, boxer and swimmer and played Rugby for the school.  He also joined the school’s Officer Training Corps (OTC).  In 1914, Arthur was commissioned as a Second Lieutenant into the Duke of Cornwall's Light Infantry.  After service in India, Aden and Egypt, the Regiment was disbanded, so Arthur applied to transfer to the fledgling Royal Flying Corps.  He trained in Egypt, where he gained his "wings".

Posted byck to Britain, while on patrol in a Home-Defence Squadron on 31st December 1917, Arthur was killed in a flying accident.  At the time of his death, Arthur held the rank of Lieutenant.  He was buried in Richmond Cemetery in Surrey and is also remembered on the Marlborough School Roll of Honour, Packwood Haugh, and Balliol College.

“Punch” Magazine and “The Westminster Gazette” published some of Arthur’s poetry, as did his school Magazine.  His WW1 collection “Forlorn Adventures and other poems” was published by Sidgwick & Jackson, London, in 1918.  Arthur’s poems were also included in four WW1 poetry anthologies.

When the moonlit shadows creep,
When the sun beats pitiless down,
Steadfast, vigilant they keep
Watch and ward about the town.

Guardians of our Empire’s gate,
In the sunshine and the dust,
Still beside their guns they wait,
Faithful to their wary trust.

Only days of monotone,
Sand and fever, flies and fret,
All unheeded and unknown,
Little thanks they’re like to get.

Yet mahap in after days
Distant eye the clearer sees
Gods apportioning the praise
Shall be kindly unto these.


With grateful thanks to Sharon Casey, a distant cousin of Arthur Lewis Jenkins, who sent me quite a lot of information and to Paul Thompson, son of Susan V. Thompson, nee Jenkins, daughter of Jock Vaughan Jenkins;
and to
Jacky Rodgers,  Phil Dawes and Dean Echenberg and Rugby in the First World War;
to Ian Glen, Arts and Humanities Librarian at Swansea University and to Sidgwick and Jackson the publishers.