“The Father of us all” – Ted Hughes 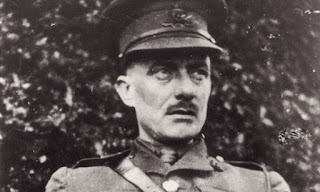 Educated at Battersea Grammar School and St. Paul’s School in London, Edward won a scholarship to Lincoln College at Oxford University.  While studying at Oxford, Edward met James Ashcroft Noble, a former editor of “The Liverpool Argus” newspaper, who wrote for “The Spectator” and had articles published in “The Yellow Book”.

Noble encourage Edward to write and Edward fell in love with James Noble’s second daughter Helen Berenice.  They were married in Fulham in 1899 and had three children.

Edward began working as a critic for “The Daily Chronicle” in London and at that time befriended Welsh poet W.H. Davies, renting him a cottage on the Thomas family farm in Sevenoaks, Kent.

The opening of Harold Monro’s Poetry Bookshop in Bloomsbury, London in January 1913, brought together poetry lovers and poets alike for poetry readings, discussions, etc.  Rupert Booke, who Edward had met in the village of Steep in 1910, called the Bookshop “The centre of the New Poetry.”

Edward enlisted in the Artists’ Rifle Regiment in 1915 as a Private.  In November 1916 Edward was commissioned into the Royal Garrison Artillery as a Second Lieutenant.  He was killed on the first day of the Battle of Arras – Easter Monday, 9th April 1917 – on the Western Front in France and was buried in the Commonwealth War Graves Commission Cemetery at Agny, France – Row 3, 43.

Edward's friend, the poet W.H. Davies, wrote a poem about Edward’s death – “Killed in Action (Edward Thomas)” – which was published in Davies’ collection “Raptures” in 1918.  The Thomas family friend the poet Eleanor Farjeon wrote a poem to the memory of Edward Thomas entitled “Easter Monday (In Memoriam E.T.)”. Edward's brother, Julian, who was also a poet, also wrote a poem to the memory of his brother (see post about Julian Thomas on Forgotten Poets 9 May 2021).

Edward Thomas is among the poets commemorated in Poets’ Corner in London’s Westminster Abbey.

The flowers left thick at nightfall in the wood
This Eastertide call into mind the men,
Now far from home, who, with their sweethearts, should
Have gathered them and will do never again.

The poets W.H. Auden and Cecil Day Lewis thought of Edward Thomas that he was a poet “they had little or no hope of ever equalling” and WW2 poet Ted Huges labelled him “the father of us all”.

Sources:  Catherine W. Reilly “English Poetry of the First World War:  A Bibliography” (St. Martin’s Press, New York, 1978) and Matthew Hollis “Now all Roads lead to France: The Last Years of Edward Thomas” (Faber & Faber, London, 2012)
Find my Past and Free BMD
http://www.greenfolder.co.nz/WHD/poetry/killedinaction.html
https://www.poetrybyheart.org.uk/poems/easter-monday-in-memoriam-e-t/
“Out in the Dark” by Edward Thomas
Out in the dark over the snow
The fallow fawns invisible go
With the fallow doe ;
And the winds blow
Fast as the stars are slow.
Stealthily the dark haunts round
And, when the lamp goes, without sound
At a swifter bound
Than the swiftest hound,
Arrives, and all else is drowned ;
And star and I and wind and deer,
Are in the dark together, – near,
Yet far, – and fear
Drums on my ear
In that sage company drear.
How weak and little is the light,
All the universe of sight,
Love and delight,
Before the might,
If you love it not, of night.
Posted by Lucy at 04:45