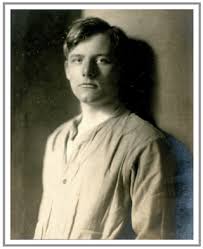 Geoffrey Dearmer was born in Lambeth in London, UK on 21st March 1893.  His parents were Anglican Church priest, liturgist and hymnologist, Percy Dearmer  who became Canon at Westminster Abbey, and and his wife, Mabel Dearmer, nee Pritchard White, who was a writer and artist.  Geoffrey had a brother -  Christopher – who was born in 1894.

The Dearmer family were friends with Kathleen Scott, the sculptor and widow of Robert Falcon Scott (known as Con), the Antarctic explorer.  Geoffrey wrote poems to Kathleen and they used to go dancing together.  When war broke out in 1914, both the Dearmer boys were studying at Christ Church College, Oxford University.  They volunteered and Geoffrey was commissioned and served with the London Regiment at Gallipoli and on the Western Front during The Somme Offensive. Christopher became a pilot with Royal Naval Air Service (RNAS) and died of wounds received while serving in Gallipoli in 1915. Geoffrey was appointed a lieutenant in the Royal Victorian Order (LVO).

In 1915, the boys’ father Percy Dearmer volunteered as a Red Cross Chaplain and he and his wife went to Serbia, joining the Third Serbian Relief Unit. Mabel served as a nursing orderly.  Mabel contracted enteric fever (typhoid) in June, and died on 11th July 1915. Her letters were posthumously published as “Letters from a field hospital. With a memoir of the author by Stephen Gwynn”.  See https://inspirationalwomenofww1.blogspot.com/2014/04/mabel-dearmer-1872-1915.html

From 1936-1958 Geoffrey was Examiner of Plays in the Lord Chamberlain's office.  In 1936, Geoffrey married Margaret Proctor and they had one daughter.

In 1997, TheGeoffrey Dearmer Award for new poets was founded in his memory.

Geoffrey was one of the poets featured in the Exhibition of Poets, Writers & Artists of the Somme, held at the Wilfred Owen Story in Birkenhead, Wirral, UK in July 2016.