With many thanks to Geoff Harrison for finding another poet for the List of Forgotten Poets of the First World War. 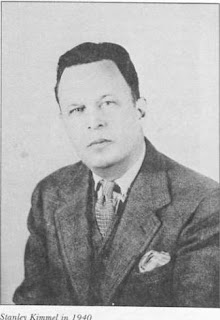 When war broke out in 1914, Stanley was about to start college at the University of Southern California (USC). After the entry of the Unites States of America into the war on the side of the Allies, Stanley abandoned his third year of studies, and travelled to France. His plan was to enlist with the famous French flying squadron, the Lafayette Escadrille.

Stanley wrote: "In those days the French Government allowed only five days from the time you entered France to get into uniform. So I met another American who was driving ambulances for the Army and as my five days were running out, I became an ambulance driver."

The Army Stanley referred to was the French army, and the ambulances were part of the American Field Service.  Kimmel was soon driving his Buick ambulance with Section Sanitaire Americaine, Ambulance 24, Car No. 268 in the Verdun Sector. Stanley was  awarded medals for his service in three areas of conflict: Verdun, Morte Homme and Hill 304.

In 1918 with American forces now on Active Service in France, Kimmel, like other American volunteers, was obliged to join the American forces. He became a cadet with the US Navy Air Force - still harbouring his desire to reach for the skies. It is not known if he ever got his wings.

God!
Today I killed a man.
I stuck him through
And saw his blood spurt.
His flesh was like warm butter,
Heard him cry and say something
Which I did not understand.
He fell and took my gun with him,
And then - I thought of Liege,
And did not give
A damn.

Stanley wrote about his experiences as an ambulance driver on the Western Front in a book entitled"Crucifixion", published in 1922.  This is avaiable to read on Archive as a free down-load: https://archive.org/details/crucifixion00kimm/page/n5

Regarding the American Field Service, there is a video showing the work of the AFS in the field:  https://www.youtube.com/watch?v=Fijk1uv9I0w

The poem “Blue Steel” was one of a series of poems published in 1919 in a book entitled "Souvenirs" (Los Angeles: Grafton, 1916). This is available to read on Archive: https://archive.org/details/souvenirs00kimmrich/page/n5.