Harold was born on 14th March 1879 in Brussels, Belgium. His parents were Edward William Monro (1848–1889), civil engineer, and his wife and first cousin, Arabel Sophia (1849–1926), daughter of Peter John Margary, who was also a civil engineer.  When Harold was nine his father. The Monro family lived in Bloomsbury in London, UK. Harold’s paternal grandfather was Dr Henry Munro FRCP MD. 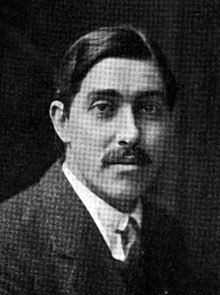 Educated at Radley College and Gonville and Caius College, Cambridge, Harold’s first collection of poetry was published in 1906. He also edited the magazine “The Poetry Review”.  Harold opened the Poetry Bookshop at 35 Devonshire Street in Bloomsbury in 1913.  This was to encourage young and established poets who gave readings of their work to poetry enthusiasts.  Harold also helped the poets to have their work published. Above the Bookshop were rooms which Harold let out to aspiring poets such as Wilfrid Wilson Gibson and Wilfred Owen.  Harold co-operated with Edward Marsh in publishing the Georgian Poetry series.

Harold’s first marriage to Dorothy Elizabeth Browne in 1903 was not a success.
In March 1913 Harold met Alida Klemantaski who took over the running of the Bookshop when Harold was on war service in the Garrison Artillery. The couple married in 1920. Alida's brother Louis Klemantaski, was also a poet - he died at the Somme in 1916.

Harold’s poems "Youth in Arms" were written in the early months of the First World War and seem to have been inspired by his friend, Basil Watt, who was killed at Loos in 1915.

When you have tidied all things for the night,
And while your thoughts are fading to their sleep,
You'll pause a moment in the late firelight,
Too sorrowful to weep.

The large and gentle furniture has stood
In sympathetic silence all the day
With that old kindness of domestic wood;
Nevertheless the haunted room will say:
"Someone must be away."

The little dog rolls over half awake,
Stretches his paws, yawns, looking up at you,
Wags his tail very slightly for your sake,
That you may feel he is unhappy too.

A distant engine whistles, or the floor
Creaks, or the wandering night-wind bangs a door

Silence is scattered like a broken glass.
The minutes prick their ears and run about,
Then one by one subside again and pass
Sedately in, monotonously out.

You bend your head and wipe away a tear.
Solitude walks one heavy step more near.