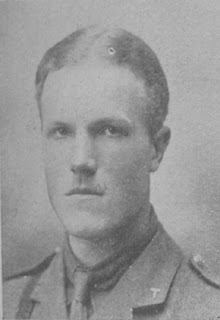 Born in Hampstead, London, UK on 26th March 1894, Geoffrey was the elder son, only surviving son and eldest of three children born to John Frederick Karl Daman, a solicitor, of Kenilworth, Carshalton and his wife, Rosaline Mary Isabella, nee Dell.  Geoffrey’s sister was Katherine, b. 1897, and their brother who died was John, b. 1900.

When he was eight years old, Geoffrey wom a scholarship to St. George's School, Windsor Castle. He sang in the Choir at Westminster Abbey at the Coronation of King Edward VII on 9th August 1902 and later became the leader of the Royal Choir.

Geoffrey’s edication continued at Repton School, where he became a Prefect and Colour Sergeant in the Officers’ Training Corps (OTC).  He then went to Germany for six months before going up to Mgdalene College at Oxford University, where he joined the College OTC (Artillery).

On 25th August 1914, Geoffrey was commissioned as a Second Lieutenant into the 4th Royal Berkshire Regiment.  He was transferred to the 4th Bn, Seaforth Highlanders in September 1914, was posted to France on 5th  November 1914 and fought in the battle of Neuve Chapelle.

He was appointed Second in Command of the Bomb Mortar Section of the Dehra Doon Brigade.  Geoffrey was killed by a sniper near Richebourg l'Avoue on 24th May 1915.   He was buried in Cabaret-Rouge British Cemetery, Souchez, France, Grave Reference:  Plot XVII. C. 24.

Geoffrey’s poems were privately printed in 1915 under the title  “A Few Verses”, from which the following poem is taken:

The essence of True Conservatism
is reasonable change ”
THE Worker did make the ring,
Fashion and make it
His, who should take the ring,
Ever to take it,
Ah, ’gainst what suffering
Ever to stake it,
Till He who made the ring
Also unmake it.

So ? Yet suppose that He
Testing should find it
Flawed in the tracery
Wrought there to bind it,
Think ye, my friend, would He
Leave it, or mind it ?

Would he not take the ring
Gently, nor break it,
But cunningly fashioning
Cut—and remake it ‘it?

With thanks to my friend Margaret for her help and support.