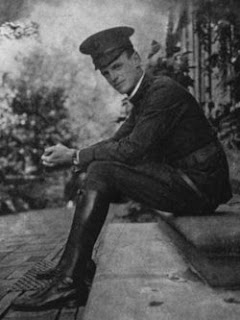 James was the grandson of the author of “The Last of the Mohicans”.

Educated at the Albany Academy and the Taft School, Watertown, Connecticut, James went on to study law at Yale University, from which he graduated in 1913.

Wishing to serve with the American Expeditionay Force in France, in May 1917 James commenced training at the Officers’ Training Camp at Madison Barracks, NY.  On 15th August 1917 James was commissioned as a 1st Lieutenant and posted to Battery D, 308th Field Artillery, 78th Division.

James Fenimore-Cooper’s WW1 poetry collection “Afterglow” was published in 1918).  The title poem was later set to music by Charles Ives.

I saw at night upon the sky
The clear path of a meteorite
Blaze down unmeasured space and die;

As if indeed the heavens were cleft
By God’s bright finger, and again
Only the winking stars were left.

My thoughts sang through their orbits high:
My restless spirit questioned “why?”

From “As Ashes Follow Fire: Neglected Voices of World War One” page 98

With thanks to Robert Cochrane who has included James in his wonderful anthology “As Ashes Follow Fire: Neglected Voices of World War One” (The Bad Press, Manchester, UK, 2018)

Photograph and additional information from https://www.findagrave.com/memorial/95156000/james-fenimore-cooper
Here is another one of James's poems, kindly sent to me by author AC Benus:
Thy voice, as tender as the light
That shivers low at eve –
Thy hair, where myriad flashes bright
Do in and outward weave –
Thy charms in their diversity
Half frighten and astonish me.
Thy hands, that move above the keys
With eager touch and swift –
Whereby thy mind, with magic ease
Doth into music drift –
They fill me with a strange delight
That doth defy expression quite.
Thine eyes, that hold a mirth subdued –
Like deep pools scattering fire –
Mine dare not meet them in their mood,
For fear of my desire,
Lest thou that secret do descry
Which evermore I must deny.
Thy very quiet dignity
Thy silence, too, I love –
Nay – thy light word is destiny
Decreed in spheres above –
My mind, my heart is bowed to thee,
And hard it is that I must flee.
Hard is a world that dare not give
For every love a place:
Hard is a power that bids us live
A life bereft of grace –
Hard, hard to lose thy figure dear,
My star and my religion here.
James Fenimore Cooper, II – 1916
AC Benus tells me that he recently discovered composer Greg Bartholomew has set that poem to music. This four-voice canon is very moving, especially near the end. And if you watch the Youtube version, you can see the full score.
https://www.gregbartholomew.com/everylove.html
Additionbal information received from Carlos Rosende in December 2021:
Though not included in his biography listed on this site, I thought it
might be worth including that after graduating from Yale, James Fenimore
Cooper, Jr. entered the Harvard Law School class of 1917.  His name is
listed on the memorial wall in HLS's Langdell Library, along with other HLS
alumni who died during WWI.