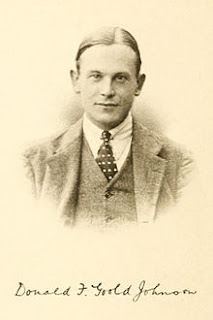 Donald was born on 6th March 1890 in Saffron Walden, Essex, UK, the youngest of four children – three boys and a girl - born to the Reverend Richard Alexander Johnson and his wife, Eliza Bennett Johnson.

Educated at Caterham School, Donald went up to Emmanuel College, Cambridge, where he joined the Officer Training Corps.  Donald demonstrated an aptitude for writing poetry and in 1914 was awarded the Chancellor’s Medal for English Verse for “The Southern Pole”, about Captain Robert Falcon Scott’s doomed expedition to the Antarctic.

When war broke out, Donald joined the 2nd Battalion of the Manchester Regiment. Commissioned as an officer in February 1915, Donald was posted to France on 7th December 1915.  His brother Owen served with the 11th  Suffolk Regiment and his brother The Rev. Lewis G. Johnson, served with the YMCA in France.

Wounded during an attack on German Lines in Authville Wood on 15th July 1916 during the Somme Offensive, Donald died at the Dressing Station in Bouzincourt, France soon afterwards and is buried in Bouzincourt Communal Cemetery Extension.

Owen Johnson was killed during the Battle of Arras in 1917 and their sister died in Calcutta in 1915.  Donald’s poem “H.M.J.” was dedicated to her memory.

A collection of Donald’s poems was published in 1919 by Cambridge University Press, entitled “Poems”   This is available as a free download on Archive: https://archive.org/details/poemsgoold00john/page/n9

It may be, in the after-years,
Our souls shall touch across the space,
It may be, on my heart of tears
Shall break the music of thy grace;
But who can make again for me
That perfect form, that maddening glee?

It may be that thy voice shall speak
Across a universe unknown.
Like some gold -fleckered sunset streak
That crowns one moment's bliss alone;
But shall I know in Paradise
Thy godly lips and hands and eyes?

It may be, in that heavenly land
All priests and prophets have foretold,
That spectre beings hand in hand
The great white throne of God enfold;
But shall I feel and see thee there,
And kiss the flowers of thy hair?

It may be, Sweet, that love shall live
Beyond the shadow-hours of Death,
That Hope some comfort still shall give
When this fond body yields its breath;
But could I know that I should see
Thy glorious lips, all fear would flee.

It may be, in another world
Far from the sorrowings of this,
I still shall watch thy lips shy-curl’d
And taste their beauty in a kiss;
It may be — but the very may
Takes half the glorious hope away.

Then, Darling, kiss me while the light
Shines on thy hair and radiant form,
This day at least the sun is bright
And bodes no darkness of the storm;
Come, let us join our sweet lips fast
Tho' this same hour should be our last.

The photograph of Donald - photographer unknown - is in the front of his collection of poems.