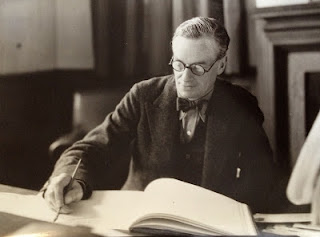 Edmund was born in Oxford on 10th May 1881. His parents were Edmund Arbuthnot Knox, an Anglican church minister, and his wife, Ellen Penelope Knox, nee French, daughter of Thoms Valpy French, Bishop of Lahore.  Edmund senior was the Bishop of Manchester from 1903 until 1921.

Educated at King’s School Birmingham, Rugby and Corpus Christie College, Oxford, Edmund taught for a year at North Manchester Preparatory School before going to London to become a journalist.  He was a writer and poet and used the pen name ‘Evoe’.  In 1912, he married Christina, daughter of the Bishop of Lincoln and they had two children – Edmund Rawle and Penelope Mary.  Christina died in 1935 and Edmund married Mary Shepard, daughter of E.H. Shepard, illustrator of “Winnie the Pooh”.  Mary illustrated “Mary Poppins”.

During the First World War, Edmund joined the Lincolnshire Regiment as a Second Lieutenant. Posted to the Western Front, he was wounded during the Battle of Passchendaele.

The WW1 collection of E.V. Knox – “Poems of Impudence” – was published by Arthur Watts in 1926. He also had a poem published in the WW1 anthology “The Fiery Cross” edited by Mabel C. Edwards and Mary Booth (Grant Richard, London, 1915) and sold in aid of the Red Cross.  Another collection was “Parodies Regained” (Methuen & Co. Ltd, London, 1921), illustrated by George Morrow, cartoonist and book illustrator.