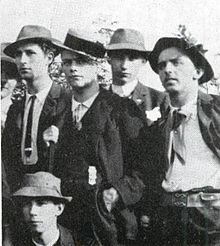 Karl Stamm was born on 29th March 1890 in Wädenswil, Canton of Zurich, the sixth of nine children. His father came from Schaffhausen and ran a china shop.  Karl lost his mother and his favourite brother at an early age - the deaths overshadowed his childhood and later influenced and inspired his poems.

At an early age, Karl demonstrated an aptitude for drawing and writing. He completed a teachers training course at the teacher training college in Küsnacht in 1906. There he met Eduard Gubler, who went on to achieve fame as an artist. From 1910 to 1914 Karl worked as a primary school teacher in Lipperschwändi, Bauma before moving to Zurich in 1914.

When war broke out in 1914, Karl was called up to military service and served in the Swiss Army at the Swiss border. His initial patriotic enthusiasm later gave way to deep sympathy for the suffering of those involved in the conflict. After suffering a nervous breakdown and spending a long time in hospital, he was discharged from military service in 1917. Karl died in Zurich on 21st March 1919 of the Spanish flu.

Photo:  Karl Stamm, 2nd from left, on a trip organised during his time at the teacher training college in Küsnacht. To his left is Karl’s friend Eduard Gubler – photographer unknown. 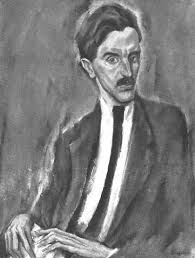 "Der Sturm" (Tr. The Storm) was a German art and literary magazine published between 1910 and 1932